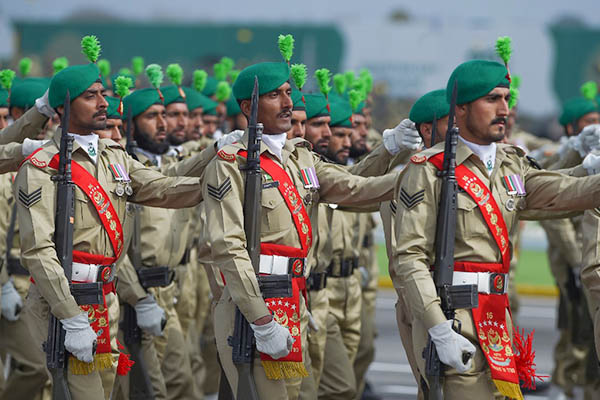 On March 23, the Pakistani nation commemorated Pakistan Day with a parade featuring all kinds of military hardware—from nuclear-capable missiles to tanks, artillery guns, drones and even air defense systems. A squadron of Pakistan Air Force jets also enthralled audiences with a spectacular acrobatic performance, while patriotic songs eulogizing the armed forces—prepared by the ubiquitous ISPR—were broadcast on all TV and radio channels. This is nothing new; indeed, a military parade has always been an integral part of Pakistan Day celebrations. Which raises the question: how is the exhibition and celebration of military power relevant to the event March 23 commemorates?

Otherwise known as Pakistan Resolution Day, March 23 simultaneously marks the date when, in 1940, the Muslim League adopted a resolution calling for the establishment of an independent federation comprising provinces with Muslim majority, as well as the 1956 adoption of the country’s first Constitution, transitioning from a dominion to a republic. Both were politically historic events and should be celebrated as such. What they weren’t, however, were military events. Yet at no point on Pakistan Day was there any attempt to remind us of the political struggle that resulted in the creation of Pakistan.

Such militaristic celebrations of purely political events are not uncommon—at least not in countries that have won independence through military struggle or armed revolutions. But while Pakistan’s military marked the occasion with great fervor, there was a marked absence of celebration from the average citizen; after all, even the patriotic songs for the occasion were composed at the behest of ISPR. This is a worrying sign of creeping militarization of Pakistani culture and society.

The glorification of the military and its strength rarely boosts a populace’s sense of security, rather it projects a false version of the same. Secure and self-confident nations do not indulge in this form of pageantry. Flaunting our status as a nuclear state does not make us strong; it merely exposes our self-doubt. Nothing is more worrisome, both within and out, than a nuclear armed nation facing economic collapse, political instability, a ticking population bomb and environmental degradation.

Surely the sacrifices of the armed forces and their role as defender of Pakistan’s security must be acknowledged and praised. But it should not oblige us to become a militaristic state. Pakistani forces have done well in countering Indian aggression and that should be a source of self-confidence. Indeed, this year’s Pakistan Day carried greater significance as we stood united in the face of foreign aggression and our armed forces bravely defended the country’s sovereignty We showed restraint and avoided escalation. It is no longer in our interest to resort to jingoism.

March 23 should have been a day to demonstrate national unity and cohesion; a day of reflection and retrospection. Sadly, instead of that, all we got was a military parade and martial anthems, which, commissioned as they were by the ISPR, reflected patriotic sentiments. But why should it only be about the military? There are other aspects of society and the role of civilians in the progress of a nation that should be highlighted. The omnipotence of ISPR in determining a national narrative on every thing from security to culture and social values raises some questions.

Officially the information wing of the armed forces, the ISPR’s current overarching role is unmatched in Pakistan’s history, not witnessed even under military rule. It is clearly a manifestation of creeping militarization and reinforces a perception of the expanding space presently occupied by the military. It is no longer limited to its traditional domination of security and foreign policy issues; the military now seem to be expanding into the field of culture. This process of militarization involves many interrelated aspects that encompass several levels of society. It may not be martial law, but the shadow of the military covers almost every aspect of Pakistan’s social and political spectrum.

One glaring example of the militarization of culture is the recent rise in the number of war films and documentaries eulogizing the role of security forces. Many of these projects have been sponsored by ISPR. One obvious and major factor driving this phenomenon is Pakistan’s status as a frontline state beset by conflict. Thousands of soldiers have laid down their lives fighting insurgencies and terrorism. The sacrifices and bravery of these soldiers must be acknowledged and highlighted. But the military’s sponsorship devalues such efforts. If anything, militarization has a negative impact on cultural and social development and a militaristic narrative can widen the social-political divide, as witnessed in recent times.

Even more problematic than the cultural hegemony is the military’s growing control over media. Journalists today are under much greater pressure to follow ISPR directives. Those who dare defy the “advice” are penalized. In the past, governments used the Press Information Department to keep the media in line; now it is the ISPR and military intelligence that do this job, admittedly rather more effectively.

Unsurprisingly, the media generally is now far more timid and willing to toe the line. Any statements by the ISPR’s director-general are “breaking news”; no previous military spokesman has received such personalized projection. Even his presence at the Karachi National Stadium to attend the final match of this year’s PSL made TV headlines. He also has a fan club. For a serving Army officer, such personal promotion comes across as rather unbecoming.

A free, pluralistic and independent news media contributes to the social, economic and political development of a nation. Unfortunately, recent moves suggest an attempt to stifle freedom of expression and plurality of views in the name of national security. This is extremely dangerous for the political and social cohesion of Pakistan.

Which brings us to civil-military relations and the power balance between them. The ruling PTI and the military leadership assuredly enjoy greater understanding and cooperation than was visible in previous civilian administrations. It is indeed a good omen. But creeping militarization has the potential to hamper the political process, the continuation of which is in the best interest of the country and the security forces. It is not too late to introspect and counter the damage militarization can have on a country. Robust and active armed forces are, of course, vital for our security; an increasingly militarized state, however, is not.

Reminds me of Goebel!!

Author has a legitimate right to express his views on Pakistan Day Parade but he has no right to cause dissension in the unity of Pakistan. Pakistan is facing hybrid warfare from east ,West ,north and south . Indians were able to integrated Princely states on the sheer weight of military muscles. Author wants Pakistani nation to face hybrid warfare with ghazals and vain poetry , political vendetta and sold out journalism . Thank you Newsweek for vitriolic propaganda. It serves your paymasters very well, not the interests of Pakistan.