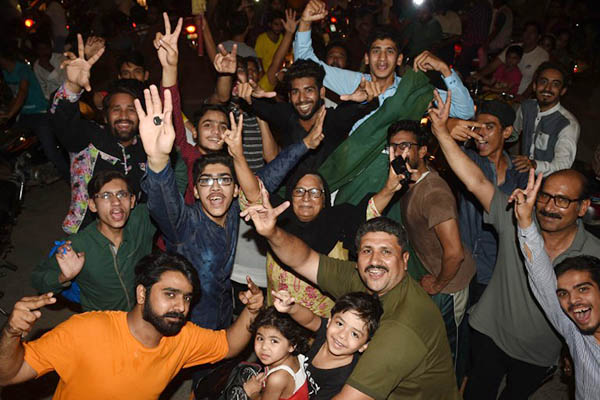 On Sunday, Pakistan thrashed favorites India by 180 runs to clinch the ICC Champions Cricket Trophy title in a thrilling competition at London’s The Oval. In the tournament’s opening match, India had inflicted a humiliating defeat on the same Pakistani side, which had been unable to offer much defense or offense. Then, uncannily, the same squad arose from its ashes and defeated three teams to reach the final and a second chance to take on India.

Pakistan was naturally festive. After watching the match on big screens set up at major thoroughfares across the country, crowds of fans celebrated the triumph with dance and loud jeers. While the country’s youth took the lead, the old and infirm too abandoned their cots and danced to the drumbeat of nationalism. The entire population was united as one nation, a rebuke to those very credible scholars who declare on good evidence that Pakistan is a state that hasn’t yet become a nation. Even some madrassa leaders, who usually stay away from sport as distraction from piety, joined the saturnalia, equating cricket with jihad.

Sport in history has been a pantomime of war among city-states. The nation of Pakistan got united because the contest was with India, which clearly means that the cementing factor was the urge to throw the Hindu wrestler. Starting in 1952, India-Pakistan cricket has always been a kind of wrestling match. When Pakistan’s hockey team was the world champion, its Indian counterpart was a timid weakling, but the real battle was always in cricket. Starting with Captain Kardar down to Captain Imran Khan, religion was not directly inducted into it; but now you have to prostrate yourself, preferably bearded, on the pitch if you score a century or take five wickets. This time at The Oval the entire team did it to complete the parable of jihad. The best message of congratulation appropriately came from Pakistan’s Army chief. India, shelling Pakistan’s border villages across the ceasefire line, felt humiliated. And peace, obviously, is nowhere in sight.