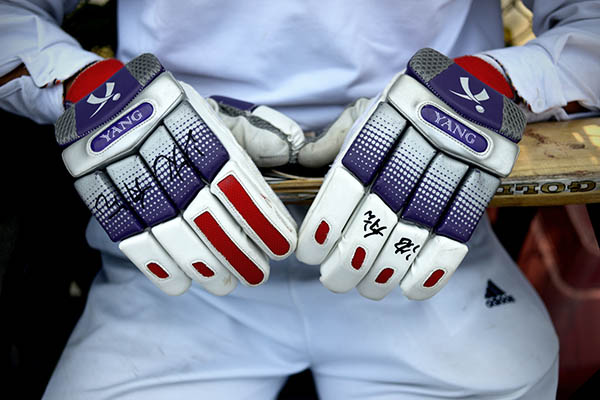 Players and coaches claim Beijing only supports Olympic sports and has not funded any cricket teams.

White-clad Chinese cricketers roared as a homegrown bowler sent the bails flying in Beijing—to the unfamiliar clatter of leather on plastic.

The national universities’ tournament, the country’s top competition, was held on an astroturf baseball field in the capital, where the pitcher’s mound had been removed, the stumps were made of plastic and the boundary marked out by orange discs.

It was a sign of the lack of government support for the non-Olympic sport in China, where only around two-dozen homegrown teams play regular competitive matches and a few foreigners are trying to drive it forward.

Across the Himalayas, cricket-obsessed India is top of the world rankings in one-day internationals. But despite an even larger population, China is listed last but two in Asia, ahead of only Myanmar and tiny Brunei.

“When I got here, everyone was holding the bat like it was baseball,” said Rashid Khan, the former Pakistani international who now coaches China’s national team, one of the few spectators at the university event. “Now they can play good cricket,” he added, as players hooked balls towards the baseball netting. “The bowlers at least are bowling with a decent action.”

The first recorded cricket match in China was played in 1858 between a team of officers from the British navy’s HMS Highflyer and a side from Shanghai.

But while the British Empire spread the game to Australia, South Asia and the Caribbean amongst others—its former territory Hong Kong recently qualified for next year’s World Twenty20 in Bangladesh—mainland China resisted complete colonization and the sport never caught on.

Now a wave of sports governing bodies from American football to rugby at pushing their wares in China, hoping to secure a slice of its vast market after basketball and football won tens of millions of fans in recent decades.

The Malaysian-based Asian Cricket Council funds the national team, and Briton Matt Smith, who coaches at a university in the northeastern rustbelt city of Shenyang, said: “We’ve begun to build a cricket culture.”

There are expatriate sides in China’s major cities, but according to the state-backed Chinese Cricket Association (CCA) the vast country has only 68 homegrown teams, in schools and universities.

Smith has carried balls and bats—not easily found in China—back from Britain but one of his toughest tasks has been translating cricket’s unique lexicon into Chinese. He rendered “googly”—a type of delivery bowled by a right arm leg spinner—as a “cross-eyed ball,” and bowlers send down “bright spin” rather than “off spin.”

The spin delivery known as a “Chinaman” has been bowled in the country but remains un-translated. Meanwhile, the cricketers’ cry of “Howzat!” is apparently universal.

“If we want to get better we need to study abroad, there are not enough high level matches here in China,” said Jiang, a floppy white hat framing his face. “If cricket is to be successful here, it needs to become an Olympic sport,” he added.

The country’s only cricket stadium was built for the 2010 Asian Games in Guangzhou, where there is no adult Chinese team to use it.

China’s men’s side meet mostly crushing defeats in international matches, but its women cricketers have occasionally fared better, notching victories against Malaysia and Thailand in the 2010 tournament, before being on the wrong end of a 128-run thrashing from Pakistan. Nonetheless they are still ranked joint-bottom in Asia.

Terry Zhang, of the CCA, admitted that there were “no funds from the central government.” But that has not prevented China from investing in the game abroad—it reportedly funded $132 million worth of cricket facilities in the West Indies in recent years, including a $30 million loan to Jamaica for a 25,000-seat stadium. The loans were dubbed “cricket diplomacy” by Caribbean media, as Beijing seeks to win friends in a region where several island countries still have diplomatic ties with Taiwan.

Back on the mainland, one of its own top players, Zhang Yufei, described as the first Chinese cricketer to score a century in a competitive match—against an expatriate side—is on the verge of retirement at just 21.

Zhang says his professional career may be over before it has even begun, and he is preparing to start work at an engineering firm run by his father. “There is no chance to make a living from cricket,” he laments.