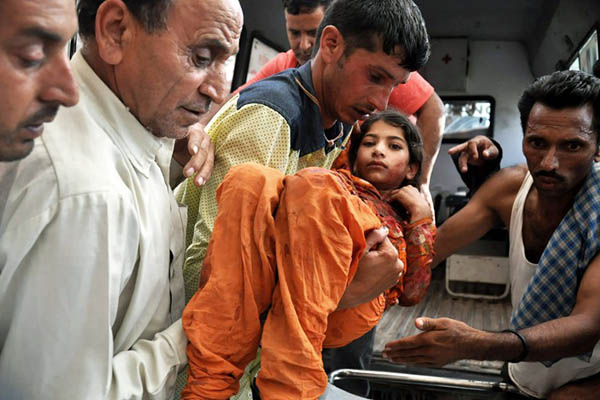 A woman was killed and eight others wounded on Sunday in the latest cross-border shelling by India in the disputed region of Kashmir, Pakistani officials said.

The casualties occurred in Nakyal Sector on the de facto Kashmir border between India and Pakistan after intermittent shelling and firing for the past three days, local government official Nazakat Ali told AFP.

“A woman was killed and eight other people, five women and three men were wounded in shelling by Indian troops,” Ali said.

Some 10,000 people in up to eight villages had been confined to their homes to avoid being hit by Indian shelling, said Adnan Khurshid, another senior government official in the area. The shelling has also damaged several village houses, as well as killing and wounding livestock, he added.

He said authorities had set up camps away from the border for people fleeing the shelling, but so far they had not come for fear of being caught in the crossfire.

India and Pakistan often accuse each other of violating a 2003 ceasefire agreement in Kashmir. The two countries have fought three wars, two of them over the divided and disputed Kashmir region. India summoned Pakistan’s envoy in New Delhi on Sunday to protest against civilian deaths in recent troop firings along their disputed border, hiking tensions ahead of talks between the rivals.

In a separate incident, six civilians died over the weekend in India-administered Kashmir after firing and shelling by Pakistani troops from across the border, according to Indian police.

Tensions between India and Pakistan are high along the Line of Control and Sartaj Aziz, Pakistan’s national security adviser, on Thursday said he would visit India on Aug. 23 for talks.