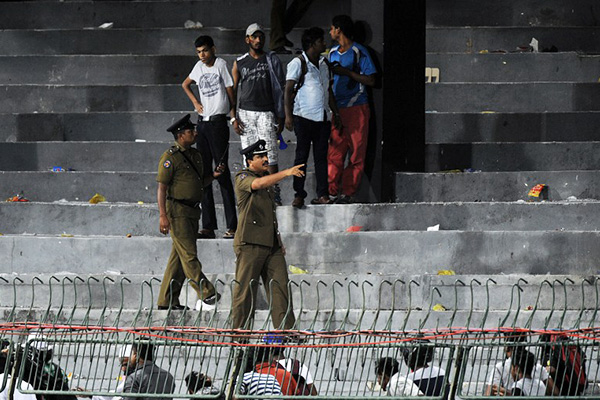 Rioting crowds forced cricketers to retreat to their dressing rooms as projectiles reached the outer field of the Premadasa Stadium during the third one-day international between Pakistan and hosts Sri Lanka on Sunday.

Police deployed anti-riot squads to clear two blocks of stands near the scoreboard as rival groups of spectators clashed, pelting stones into the grounds from outside the stadium after they were forced out during Sri Lanka’s unsuccessful run chase in the day-night match.

The hosts, chasing Pakistan’s 316-4, were struggling at 158-7 in the 34th over when the disturbances at the grounds in the Sri Lanka capital forced the umpires to order the players to their dressing rooms until the situation was brought under control. “The umpires decided to suspend play after a player complained that a stone had landed near him,” a police source at the grounds said.

Pakistan went onto win the match by 135 runs, and now lead the five-match ODI series 2-1. There were no immediate reports of arrests, but dozens of vehicles at the stadium were damaged due to stone throwing, witnesses said.

Pakistan players and fans declined to blame Sri Lankan authorities and fans at large for the disturbance, instead pointing the finger at a small group of spectators. “We can’t blame everyone for an individual wrong our support is still with SL & their fans,” Pakistan Test captain Misbah-ul Haq said in a tweet.

Ex-player and commentator Shoaib Akhtar added in his own tweet: “We can’t blame everyone for an individual wrong our support is still with SL & their fans!”

Former Sri Lankan skipper Mahela Jayawardena was indignant, however. “We should take results in correct spirit and enjoy the game,” he tweeted. “Very poor from some spectators. Hope it doesn’t reflect on all SL fans.”