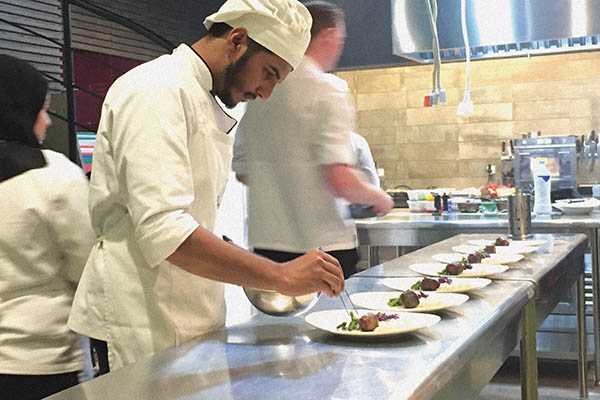 On Lahore’s candy-colored Jail Road, occupying the right half on the ground floor of the insipid EFU building is the Lahore branch, set up in 2015, of the School of Culinary and Finishing Arts. (SCAFA originally opened in Dubai in 2012.)

Author Timmothy Radman may well have had SCAFA in mind when he said, “If it looks like a duck and sounds like a duck, it could be a really ugly swan.” As far as aesthetics go, the school, which doubles as a 12-seat restaurant for multicourse dinner at 8 p.m. and 10 p.m., may be a not-so-pretty swan, but it is a swan nonetheless—especially in terms of its palate and presentation. The no-frills décor in this double-height ceiling setup makes the food the star of every evening.

Its student-run restaurant, Scafé, is mentored by a rotating foreign chef—these days that would be Rob Burns, 30, who did his earlier training at Jamie Oliver’s Barbecoa. He can’t get enough of local produce and flavors. “Over the last year, I have been to supermarkets and suppliers across Lahore and Pakistan and developed relationships for SCAFA to source good quality products,” he says. “I am now able to use great local products. I have also recently immersed myself in the Lahore food scene, and one of my favorite local dishes is takatak. What is great about it is that you are using different parts of the animal, all the way from the nose to the tail.”

Burns, the three full-time chefs, and his assistants work hard to ensure that the complexity of flavors, using mostly local products, is exotic and pleasing. The prix fixe menu now changes every week. “We structure our menu on seasons and availability of produce,” Alisha Haque, the school’s chief operating officer, tells Newsweek. “We do import special ingredients for flavors not usually available in Lahore, but local ingredients are always at the core of our fare.”

Dinner costs a reasonable Rs. 2,900 per head for a seven-course meal, not counting the mocktail and palate cleanser to transition from savory to sweet. The chief chef talks diners through the history of each dish, its preparation times and cooking methods, its sourcing—and takes questions. This seminar in deconstruction only whets the appetite. From sous-vide machines, siphons and dehydrators to convection ovens, grills and smoke guns, the kitchen techniques, and gizmos, are a marvel to behold particularly for easy-curry cooking Lahore. Diners have a front-row seat to all of this. The service is courteous, attentive and goes like clockwork, just as a well-oiled kitchen ought to operate. It’s all a mesmerizing live performance.

My seven-course saga began with what were supposed to be short-rib croquettes. What came to the table weren’t short ribs, but chicken croquettes, still delicious and served on an elongated plate with shoestring potatoes and a chipotle aioli. I inhaled them. The smoked salmon ceviche came trapped in a jar with an ají-amarillo paste, lemon juice, red onion, coriander, and (lots of) smoke. The salmon was cured with passion; each bite had sumptuous hits of the amarillo chili. The confit Atlantic cod was a miss, despite the cauliflower purée. (A miso variant would have worked far better.) The accompanying herb roasted potatoes saved me.

The sous-vide Brazilian tenderloin with braised cabbage, mustard mash, demi-glace, and foie gras was a master class, though. It had an impeccably timed medium cook and you could almost slice it with a spoon. Almost, but not really. The beef experience, away from the side dishes, was immersive. Next up was the pan-seared, rare-to-find Yellowfin tuna served on a bed of Mediterranean-style couscous with smoked Romesco sauce. Alas, Scafé was unable to change my indifference to couscous. The grain was flavorless fluff, so one dove straight for the fish, which was carefully seared, with the outside charred and the inside just a little raw.

After the strawberry sorbet, served on a metal soup spoon, came the back-to-back desserts: mini alfajores with lychee mousse and kiwi gel, and “deconstructed” lemon tartlets, which were billed as “a citrus explosion in the mouth.” Inspired by Peruvian and Spanish culinary heritage, the alfajores looked like gems, one white and one brown with chocolate straws settled on the gel and mousse. One tasted like Kit Kat, the other like Loacker biscuits. The tartlets were meant to be inspired by chef Massimo Bottura’s feigned accident that led to his world-famous tasty mess, “Oops, I Dropped the Lemon Tart.” Instead, we were served a manicured half-mess, with much order in its apparent disorder. It was a clean and serene wrap to a mostly smooth meal, the sharp pinch of citrus leaving an impression.

The portions at the school are generous, larger than a tasting menu merits. Most diners are bound to be stuffed before the two desserts roll out.

“Over the last two years we have been tweaking the portion sizes,” says Haque, “we find that the sizes we now serve are popular and work for our patrons. We want them to leave here sated and happy. We constantly solicit and give feedback to our servers and hosts; we feel that’s important to ensure a better experience for our guests.”

Feedback is taken seriously here. Diners get to fill a thoughtfully put together short survey in their food comas and these inputs allow Haque and her team to cull or improve ideas that didn’t work and develop new ones. (The school politely follows up with surveyed diners on phone or email also, for its own education.) As a result of its rotating menus and chefs, Scafé doesn’t have any signature dishes, just signature cooking methods. Despite public requests to cook up a permanent menu, the school prefers to continue experimenting.

Because it is a school, not a restaurant: “SCAFA runs successful full-time programs for students aspiring to become professional chefs and advanced programs for chefs looking to skill up their abilities,” says Haque, adding that the school is the whole package, delivering everything from practical kitchen skills to work placement.“Skilled chefs and instructors rotate between SCAFA Dubai and here every two to three months, and each chef applies his or her own personality into the seven-course tasting menu.”

Culinary courses run the gamut from pastry making to knife skills to cooking red meat. In store for March, they have “Something French with Macaroons, and Something Italian with Panna Cotta,” a three-hour class for Rs. 9,500; “Mini Masters Workup: Some Main Courses with Chicken Roulade and Risotto” at Rs. 10,000 for four two-hour classes, and “Fundamentals of Cuisine: Stock Up Your Chicken and Vegetable Stocks and Prepare Potato and Leek Soup and French Onion Soup,” another three-hour class for Rs. 9,500.

This establishment may be niche but it enriches the fairly limited culinary canon that Lahore prides itself on as the apparent food capital of the country. SCAFA should not be missed. It sure hits the sous-vide spot.