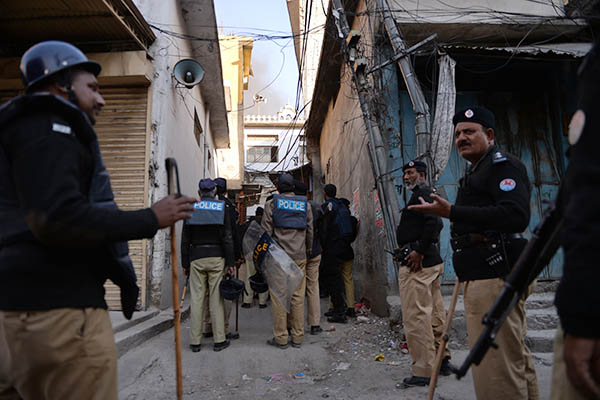 Following sectarian clashes on Friday, entire city has been shut down until midnight Saturday.

Islamabad on Saturday imposed a curfew in Rawalpindi, where sectarian clashes left eight people dead and more than 40 injured.

“A curfew has been imposed in Rawalpindi to avert further violence following the incidents on Friday,” said Waseem Ahmed, an official at the main police control room. “The curfew will remain until midnight on Saturday. The whole city has been closed down.”

Violence erupted in Rawalpindi on Friday when a procession of Shia Muslims coincided with a sermon at a nearby Sunni mosque. Angry Shia protesters attacked the Sunni mosque and seminary, torching its building and an adjacent cloth market. Rival groups then attacked each other, TV cameramen, and security forces and also fired gunshots.

The authorities deployed troops in the city and later imposed a full curfew as soldiers patrolled the streets to stop protesters coming in from other cities. All entry points into Rawalpindi were blocked, resulting in traffic chaos on Saturday morning that choked parts of the highways leading to Islamabad.

Hospital officials said that those wounded in the violence on Friday had multiple injuries. “So far we can confirm the death of eight people from the violence. We received a total of 44 injured people and 13 of them had gunshot wounds,” said Qasim Khan, a doctor at Rawalpindi’s district hospital.

An official from the rescue department said that the rescue operation was still ongoing and they were yet to fully control the fire at the mosque and seminary. “The firefighting still goes on. Mobile phone communication has been jammed, so we are unable to quickly update about the relief activities,” said Nazim Javed, a rescue worker.

Pakistan had deployed heavy security all across the country for 10th of Muharram on Friday—which is the death anniversary of Imam Hussain, the grandson of Islam’s Prophet—to avert any terrorist attack on the mourning processions of Shias. The authorities had jammed cellphone services as part of the security measures on the day, which hampered communication following the clashes. The Islamic month of Muharram lasts until Dec. 3 and is a particularly fraught time.