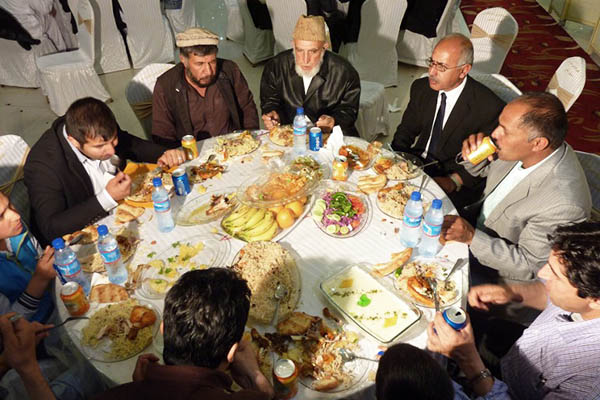 With a burst of confetti, dancers clap and twirl around a garland-bedecked groom as Afghanistan’s wedding season kicks into high gear, but lawmakers pushing for austerity are bent on taming out-of-control guest lists.

Kabul wedding halls with Las Vegas-style razzle dazzle are busy as Afghans rush to get hitched before next month’s Ramzan fasting begins, in a colorful contrast to the Taliban era when musical revelry and dancing were banned.

Hundreds of people—not counting the ubiquitous wedding crashers—typically attend celebrations in these halls segregated by gender, with a bulging guest list seen both as a social obligation and a totem of affluence. “In Afghanistan you invite the whole village, the whole tribe, everyone who ever invited you to their wedding—and they bring their own guests,” Akbar Sabawoon said over the din of drumbeats in Qasr-e-Paris, a neon-spangled hall with a huge replica of the Eiffel Tower in the forecourt. “If you invite 1,000 people, be ready to entertain 1,500,” said the cousin of the bride as a traditional Attan folk dance erupted behind him.

But in a hugely contentious move lawmakers recently passed a bill aimed at taming Afghanistan’s Wild West wedding culture, limiting the number of guests to 500 and capping the catering bill per head at 400 Afghanis. The bill seeks to relieve the huge financial strain weddings pose on grooms, who usually pay for everything from the banquet feast to bride price, a kind of reverse dowry presented to the girl’s family in the form of cash, goods or livestock.

Thousands of dollars are typically splurged on weddings, a small fortune in a country wracked by poverty and war, driving families into massive debts and forcing young men to delay marriage, lawmakers say.

But the bill, awaiting presidential approval, has sparked protest from wedding hall owners who worry the move could devastate their flourishing business—a rare bright spot in a nose-diving economy as international aid fast evaporates after 13 years of war. “Narrow-minded M.P.s are picking on this issue to distract attention from real problems such as worsening security,” said Hajji Ghulam Siddique, the owner of Uranus, one of the biggest of nearly three-dozen wedding halls in Kabul. “Even the Taliban want to kill extravagance. What’s the difference between us and the Taliban?” 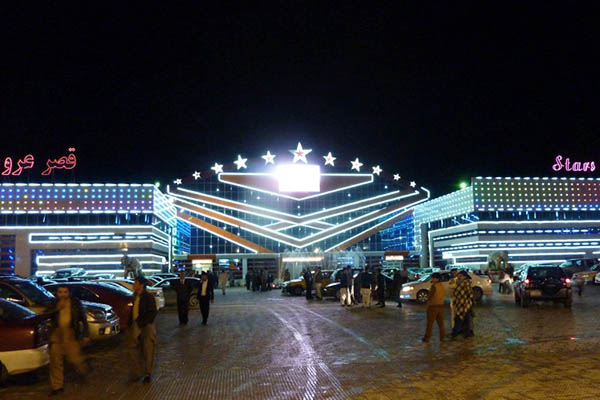 Lavish weddings, a post-Taliban phenomenon, are not only entertainment but also a source of momentary escapism from a wrenching conflict, adding a splash of color in the lives of war-weary Afghans. Outside Kabul’s glitzy wedding halls is a city that appears on the verge of a nervous breakdown, awash with snipers, checkpoints, and post-traumatic stress disorder.

Inside, over-the-top revelry offers a comforting illusion that the war is taking place in another realm. “As is the case with most Afghan laws, no one will obey this new legislation,” said government employee Shoaib Khaksari as guests at Qasr-e-Paris hunched over platters of roast chicken, Kabuli lamb pilaf, fried eggplant, yogurt and fresh fruit. “Marriages need to be lavish as they are a one-time event.”

But many Afghans concede some merit in the legislation. When Khushal Nabizada, a 34-year-old doctor of internal medicine, got hitched three years ago he was forced to spend $25,000 on the wedding party, eroding his hard-earned savings in a single night. “I wanted smaller celebrations, fewer ceremonies but the bride’s family were unforgiving,” he said. “My wife and I now look back and think what an epic waste it was.”

Some budget-conscious Afghans have found a canny way of trim the guest list: mixed weddings—a relatively rare celebration in which guests are not segregated by gender. It’s a self-imposed red line for many Afghans who voluntarily decline to attend, unwilling to expose their women to a crowd full of strangers.

Marriage is often the only outlet for sexual frustration pervasive in a conservative nation where dating or any social commingling of the sexes can be misinterpreted as a sign of perversion.

Nabizada said he routinely fields queries from his young unmarried male Afghan patients torn between their sexual cravings and their desire to be religious puritans. “Young, wife-less men grapple with hormonal rage,” he said. “Marriage is their only salvation—and many cannot afford it.”

Back in Qasr-e-Paris, the seven-member orchestra perched at the edge of the ceiling-high wooden partition separating the men from the women launched into a folk melody announcing the arrival of the bride. “Walk slowly my shining moon,” the lyrics slurred in Dari as a hush of anticipation descended on the groom’s side. “Walk slowly like a flower in full bloom.”

The lyrical feast grew louder as the groom arrived, with beads of sweat rolling off his forehead. “He must be nervous about the wedding expenses,” a guest snorted. “He should have waited until the wedding law,” another said, provoking a loud ripple of titters.