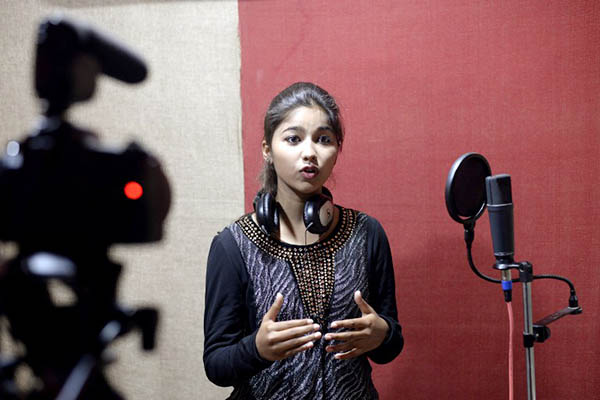 For young Indians from disadvantaged, low-caste backgrounds, singer Ginni Mahi was an inspiration, one of their own defying ancient prejudices through her infectious brand of “Dalit-pride” pop anthems.

But it wasn’t until an outbreak of horrific violence against Dalits last year that Mahi emerged as an icon, her music the soundtrack for protesters demanding a better life for their long-persecuted community, formerly known as “untouchables.”

“What is there to hide?” the 18-year-old told AFP from her one-room studio on the outskirts of the town of Jalandhar in northern Punjab state. “I am a Chamar, and proud of it,” she added, referring to a caste once stigmatized for doing so-called “unclean” work with animal skins.

Her songs—rebellious lyrics set against Punjabi dance beats—exhort pride in her Dalit roots, her community’s history of struggle and hope for the future. In one of her most popular hits Mahi seizes the phrase “Dangar Chamar,” an insult hurled at her people for centuries, and turns it into a rallying cry.

Mahi grew up listening to harrowing tales from her grandmother, a Chamar raised at a time when low-caste villagers were treated worse than animals, and vowed never to forget where she came from. “I want to be the voice of these people who were exploited, but could do nothing about it,” Mahi said.

She got her chance last year when huge protests erupted in response to a spate of Dalit hate crimes that harked back to the worst days of caste violence. Four young Dalits were stripped naked and publicly flogged after being falsely accused of killing a cow, an animal considered sacred in Hindu-majority India.

Outrage compounded later over a savage beating meted out to a pregnant woman and her husband by stick-wielding thugs after they refused to allow a group of higher-caste men to graze cattle on their land.

As anger grew Mahi’s songs went viral, spreading from her small corner of Punjab across the country, a battle cry for low-caste Indians fed up with being mistreated.

Her stand has also shone a rare spotlight on other low-caste artists, and empowered a generation of young Dalits using talent and technology to rise above the oppressive caste system. Raj Dadral, a veteran Dalit musician, said online platforms like YouTube were helping musicians gain unprecedented exposure in places where caste poses no boundary to success.

“We’ve been able to reach newer markets and audiences including Indian expatriate communities abroad,” he told AFP at his home in Punjab. “Our community has always been very supportive and proud from the start, but there was a time when I received death threats for singing.”

The proliferation of small digital recording studios across Punjab has also given artists a low-cost means of kickstarting their careers, New Delhi-based editor Hartosh Singh Bal told AFP. “As they become successful and popular, market forces take over and they want to transcend caste barriers and cut across communities,” said Bal, who spent nearly a decade in Punjab.

Mahi has her sights set on the silver screen. Her film clips—slick productions heavy on pyrotechnics and special effects—would not be out of place on MTV, and the young singer dreams of cracking India’s booming movie scene.

“I’d love that,” she said of working in Bollywood, the Mumbai-based film industry pumping out flicks rich in Indian music, dance and glamor. “I will work hard, and hopefully someday get to sing for Bollywood, maybe even Hollywood.”