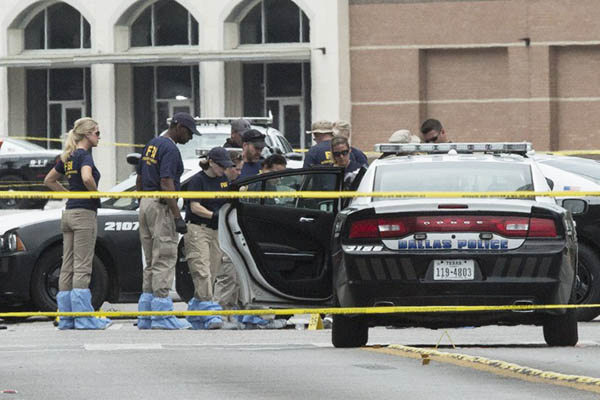 The Dallas gunman was plotting a major bomb attack, authorities said Sunday, urging calm after more than 200 people were arrested in a new night of protests over police violence against blacks.

Anger around America over the deaths of two black men at the hands of police in recent days—the stated reason for the black Dallas gunman’s deadly rampage targeting white officers—showed no signs of abating.

President Barack Obama cautioned protesting Americans against casting all police as racially biased. Obama has ordered flags at half-staff 67 times in response to tragedies, more than any other president before him, and may address that grim record when he speaks at an inter-faith memorial service on Tuesday.

Vice President Joe Biden will also attend, along with Obama’s predecessor and ex-Texas governor George W. Bush, who will deliver brief remarks, and his wife Laura.

The Dallas community’s “unity is reflective of who we are as Americans” during these trying times, said Obama, who will meet privately with the families of the five fallen police officers and those wounded.

The past week’s violence has shocked a country seemingly inured to its epidemic of gun violence and injected new urgency into the national debate on race relations and how white police deal with black suspects.

“The best way to honor the memory of Alton Sterling, the Dallas law enforcement officers and Philando Castile is to protect the people here,” Louisiana Governor John Bel Edwards said, referring to those killed in recent days. Protesters will not be “allowed to incite hate and violence, to engage in unlawful activities,” he added.

People inspired by the Black Lives Matter movement, which arose in response to police using lethal force against unarmed blacks, took to the streets in Los Angeles, New York and San Francisco in largely peaceful protests. But authorities said a full-scale riot broke out in Saint Paul, Minnesota and resulted in 102 arrests. Protesters blocked a freeway and attacked police with rocks, bottles, fireworks, Molotov cocktails and metal bars.

Twenty-one officers were injured in the hours-long melee, one of them when a rioter dropped a 25-pound chunk of concrete on his head from a bridge or overpass, police spokesman Steve Linders said. It was in a Saint Paul suburb that one of last week’s deaths occurred.

In Baton Rouge, where the other death took place, one officer was injured and 102 protesters were also arrested, Sheriff Sid Gautreaux said. Among them was activist leader DeRay McKesson, who livestreamed the incident. He was released on bond Sunday.

“The only people that were violent last night were the Baton Rouge police department,” McKesson told reporters outside the jailhouse. “The protesters remain peaceful both here and across the country.”

Both killings were caught on horrific video that quickly went viral.

In a similar case, a black man was shot dead by police Saturday in Houston, the largest city in Texas. City police said that Alva Braziel was carrying a gun, and was believed to have pointed it at officers, but in surveillance footage from a nearby gas station, he appears to put his hands up and turn around.

More than 500 people have died from U.S. police bullets so far in 2016, according to data compiled by The Washington Post.

Chilling new details about Dallas shooter Micah Johnson fleshed out a still sketchy portrait of the 25-year-old U.S. Army reservist and Afghanistan war veteran who apparently supported black militant organizations, some classified as hate groups, and died in the standoff with police.

Johnson opened fire on Thursday evening with a powerful rifle during a peaceful protest against the shooting deaths of the two men in Louisiana and Minnesota, triggering hours of chaos in the downtown section of this major Texas city.

A search of his Dallas-area home turned up bomb-making materials and a manual in which he wrote about military tactics.

Police now say he had been planning something big long beforehand, and that last week’s deaths were a trigger.

Investigators believe that “the suspect had been practicing explosive detonations and that the materials were such that it was large enough to have devastating effects throughout our city and our North Texas area,” Dallas police chief David Brown told CNN’s State of the Union.

Johnson toyed with police as he negotiated with them during a standoff after he first started shooting. “We had negotiated with him for about two hours. And he just basically lied to us, playing games, laughing at us, singing, asking how many did he get and that he wanted to kill some more,” Brown said.

Johnson insisted on speaking only to a black police officer when he began negotiating, Brown said. He knew the route of the Dallas march, triangulating police and started taking them out with his high-caliber rifle.

At one point earlier, Johnson, apparently wounded in the exchange of gunfire with police, wrote the letters “RB” in his own blood on a wall at the community college where he was holed up. Brown said it was not immediately clear what those letters meant.

Sharpshooters could not get a view of Johnson as he hid behind a brick wall, so police used a bomb carried by a robot. “I’ll do it again if presented with the same circumstances,” Brown said.