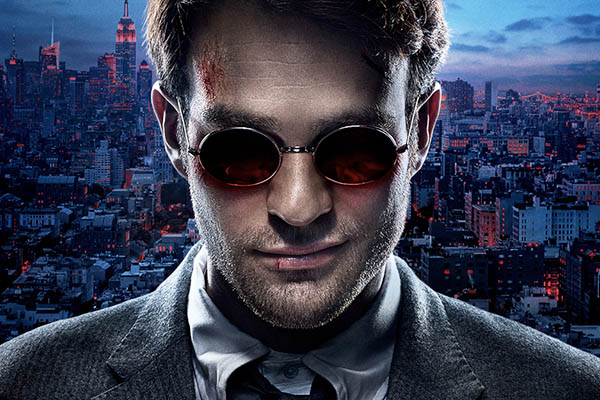 The first of five Netflix TV shows set in Marvel’s Cinematic Universe will premiere on Friday.

From the pages of a comic book that first came out in the Sixties comes the latest superhero to score a comeback on American television. Marvel’s Daredevil is the first of five Netflix original series to be rolled out by under a groundbreaking deal with Marvel Comics.

Debuting on Friday, it stars Charlie Cox as Matt Murdock, a young, blind lawyer who morphs into a baton-wielding masked vigilante after dark. Blessed with extrasensory powers, Murdock—alias Daredevil, “the man without fear”—embarks on a lone quest for justice in New York’s mean streets.

Netflix is releasing all 13 episodes of Daredevil on Friday, giving its 60 million U.S. and foreign subscribers a binge viewing option for the weekend.

With the A-list heroes of The Avengers franchise already a multimillion dollar Hollywood phenomenon, television executives are now trawling Marvel’s vast back catalog for less iconic but still fondly remembered characters. Plans call for Netflix to roll out three additional series in the coming months, each pivoting around another Marvel character—Jessica “Jewel” Jones, Luke Cage and Iron Fist.

Ultimately, the superheroes will all come together as an dynamic crime-fighting foursome in a yet-to-be-name mini-series for the expanding video-on-demand service.

Shows adapted from comic books have been a highlight of the current U.S. television season, from the Batman prequel Gotham on Fox to The Flash on The CW network. On ABC, Marvel’s Agents of S.H.I.E.L.D and Marvel’s Agent Carter each pull more than seven million viewers, Entertainment Weekly reports.

Daredevil first appeared in print in April 1964, and was created by writer Stan Lee, who also co-created Hulk, Thor and Spider-Man, and artist Bill Everett.

In 2003, the property was made into a motion picture so dismal that Ben Affleck, cast in the starring role, later called it “the only movie I actually regret.”

Online trailers for the Netflix adaptation put Murdock/Daredevil in the Manhattan district of Hell’s Kitchen, where the superhero was born and raised. Never mind that the neighborhood today is achingly hip, chockablock with groovy nightspots and some of the most expensive housing in New York. In Daredevil it reverts, albeit in 21st century guise, to its violent past as a haven for criminal gangs, a stone’s throw from Broadway’s glitter.

“I have to be the man this city needs,” says Murdock early in the series. “I’m just trying to make my city a better place.”

Early reviews are positive, with Entertainment Weekly calling Daredevil an adult-oriented saga “that doesn’t seem like it was created to sell lunch boxes.”

For Spencer Perry, writing on SuperHeroHype.com, “the framing and depiction of the city look exactly like a Daredevil comic come to life.” But he cautioned: “This isn’t a big cartoon, so the punches are felt, the blood flows and sometimes body parts are severed… There’s gore not found in any other Marvel production.”

Starring alongside Cox, who played an Irish immigrant hitman on Boardwalk Empire, are Deborah Ann Woll as Murdock’s besotted secretary Karen Page and Vincent D’Onofrio as the villainous Kingpin.