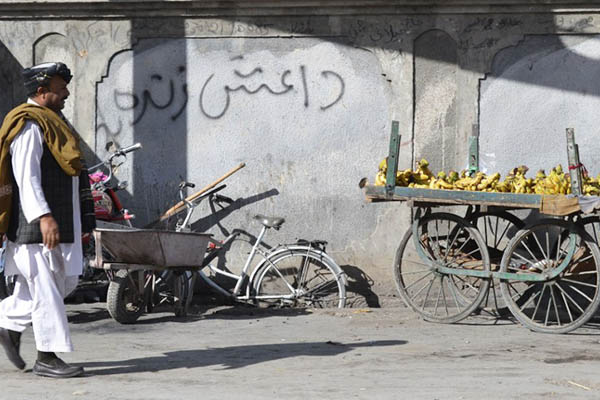 Recent arrests reveal the extent of the Islamic State’s presence in Pakistan.

“In Pakistan, even a shadow of I.S. would not be allowed,” Gen. Raheel Sharif, Pakistan’s Army chief, told the Royal United Services Institute for Defense and Security Studies in London in October. Concerns over the Islamic State group’s presence in Pakistan have gained immediacy after the recent arrests of Pakistani men and women allegedly linked up with I.S.

Federal law enforcement agencies got their first concrete evidence of I.S.’s presence in Pakistan in September. “Last year, we started monitoring and tracing the cellphone calls of Mehar Hamid, a serving superintendent in the Federal Bureau of Revenue based in Lahore,” according to an intelligence official, who spoke on condition of anonymity. “During interrogation, we learnt that Hamid was an active member of the Jamat-ud-Dawah. [After his arrest in December] he confessed to collecting sensitive information for Islamic State leaders based in Pakistan, including data on the Punjab Central Jail and the National Database and Registration Authority.”

As the investigation progressed, says the official, a small cabal of government officials was discovered to have been collecting information for I.S., allegedly because they supported its ‘holy war’ on the West. “We have thus far arrested four suspected government officials from various parts of the Punjab,” says the official. “But we are also aware of I.S. presence in Sindh and Khyber-Pakhtunkhwa provinces.”

According to intelligence officials, a number of banned groups, particularly Lashkar-e-Taiba, have formed affiliations with I.S. and are funding its activities in Pakistan. “We have found evidence of funds being collected through charities in the Middle East, especially Saudi Arabia, and various European countries, which appears to have pockets of support for Taiba,” another intelligence official said. “Many militants trust moneychangers over banks because they can find likeminded individuals” to manage the transactions discreetly.

But while intelligence officials have been trying to weed out extremist elements within the government, they concede they were unable to discover an equally troubling trend until it was far too late—Pakistani women migrating to Syria to join I.S. ranks.

“We admit we had no evidence to direct us toward the women who fled Pakistan to join I.S.,” says a police officer in Lahore, referring to recent reports of women and children migrating to Iraq and Syria. “But our subsequent investigations have found that many of them belonged to religious parties and were sympathetic toward banned groups such as the Dawah and Lashkar-e-Jhangvi,” he added.

The officer says people from various neighborhoods across Lahore have reported entire families of women and children disappearing from their homes without leaving any information about their whereabouts. “At least two women, including one Bushra Bibi—an honorary principal at the Noor-ul-Huda Islamic Center—have since contacted their relatives to let them know they are currently living in Syria,” he added.

An antiterrorism department investigation has found that the women who made their way to join I.S. in Iraq and Syria used human traffickers to cross the Pakistan-Iran border. “But this is just based on their preliminary investigation,” says the officer, “it will take more time for us to ascertain the exact details.”

A recent investigation led by Karachi’s Counter Terrorism Department found that the extremist group had also infiltrated Pakistan’s largest city. Addressing a press conference in December, the CTD chief, Umar Khitab, said the men who had pledged allegiance to I.S. were active members of various religious political parties and banned extremist groups. “I.S. is trying to recruit not only men, but also women, as they are aware that women can provide them shelter from law enforcement agencies,” he said.

During the press conference, Khitab confirmed that a May 2015 attack on a bus carrying Shia Ismaili passengers had been undertaken by highly educated professionals sympathetic to I.S. “Khalid Yousaf, a former pilot of Pakistan International Airlines, who had been affiliated with Al Qaeda before joining I.S., and Adil Masood, who was running his own accountancy college in Karachi, were both taken into custody,” he said.

According to Khitab, Yousaf’s wife, Farzana, was involved in recruiting Pakistanis for the militant group and had been establishing a women’s wing to convince more women to migrate to Syria. She was also distributing video messages of I.S. fighters to likeminded individuals. “At least 20 women from well-educated families were brainwashed into seeking migration to I.S.-held territory,” said Khitab. “They were approached through public universities so we are examining I.S. presence in educational institutions.”

“Islamic State’s core goal is to convince young Muslims that all Western countries are the enemies of Islam,” says retired police official Malik Masood. “The group has plenty of support across Europe and the Middle East and they do not find it hard to collect funds,” he said. “They are using the same methodology to recruit Pakistan men and women.”

One of the women recruited by I.S. joined the group after her husband was arrested over terror links, says her brother, Imran Khan, a local journalist. “She messaged me on Facebook and without revealing her location said she and her five children had left to join the militant group,” he said. “We don’t know where they are and hope the government can help us find them.”

Khalid, the husband of Lahore’s Bushra Bibi, says she had told him she and their five children was traveling to Kasur when she went missing. “I was so shocked when I got a call from her saying she had fled to join I.S.,” he told Newsweek. “I begged her to return but she refused and told me I should come join her. I don’t know what has happened to her. She didn’t even let me speak to our children,” he added.

A relative of Irshad Bibi, another ‘missing’ woman, said he had read news reports of women fleeing to Syria to join I.S., but had never thought it could happen to his family. “We know she and her two children are now in Syria. What we don’t know is how they were able to leave Pakistan without our security agencies learning of it,” he said.

Reports compiled by intelligence agencies appear to indicate that most of the people seeking to join I.S. have been affiliated with religious political parties or banned extremist groups. “Some of these people were involved with the Jamaat-e-Islami or the Tanzeem-e-Islami. Others were linked to the Tehreek-e-Taliban Pakistan, the Afghan Taliban, Al Qaeda or even sectarian groups such as Lashkar-e-Jhangvi and Lashkar-e-Taiba,” said independent analyst Hasan Askari. “I.S. is just providing a new platform for extremists who have grown disenchanted with their old groups,” he added.

Another senior analyst, Rahimullah Yousafzai, said the government must act now or risk the country falling into collapse. “Pakistan cannot be allowed to become a nursery for these groups,” he said. “Any negligence on the part of the government can drag us back to the 1980s and this time, I fear, there will be no way to return,” he added.

Yet despite the overwhelming evidence supporting I.S.’s bid to establish a beachhead in Pakistan, Islamabad still refuses to acknowledge the growing threat.

In December, after police in Karachi and Lahore confirmed they had arrested members of I.S., the Foreign Office claimed the extremists had “no footprint” in Pakistan. “We have alerted our security agencies to the threat posed by the Islamic State. They will take appropriate action, if required,” spokesman Qazi Khalilullah told the press.

This stands in direct contrast to provincial authorities, who have repeatedly cautioned against the rise of I.S.

Rana Sanullah, the Punjab law minister, told media in December that eight terrorists arrested in Sialkot had been in telephonic contact with senior I.S. leaders. “They were planning to move to Syria to join the fight” against I.S., he told a press conference.

The Punjab government has even issued a warning claiming I.S. is attempting to establish itself as a major force in the province. “I.S. has started recruitment and is offering up to Rs. 50,000 for anyone willing to join them, including IDPs and Afghan refugees,” claims the warning. “[We have information that] at least 50 Afghan refugees have already been sent for training in Afghanistan,” it adds.

The government is slowly evolving a cogent response to the threat. In the meanwhile, the relatives of those who have pledged allegiance to I.S. have little but hope left that their loved ones will see the light and turn back from the perilous path of jihad. “My whole life has been destroyed,” said Bushra’s husband. He is likely not alone in his anguish.