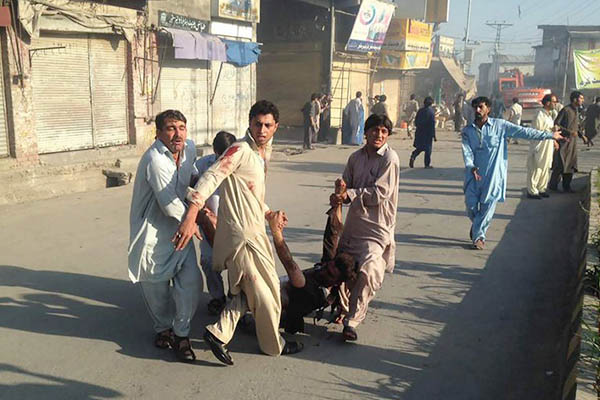 Multiple blasts and a gun attack killed more than 50 people and wounded at least 170 in three cities across Pakistan on the last Friday of Ramzan, Islam’s holiest month, as officials warned the toll could rise.

Authorities said 37 people were killed and more than 150 wounded when twin blasts tore through a market in Parachinar, capital of Kurram district, a mainly Shia area of Pakistan’s tribal belt. Local official Nasrullah Khan told AFP that the first blast detonated as the market was crowded with shoppers preparing for the Eid-ul-Fitr festival marking the end of Ramzan.

“When people rushed to the site… to rescue the wounded, a second blast took place,” he said.

Basir Khan Wazir, the top government official in Parachinar later told AFP that apparently both the blasts were carried out by two suicide bombers. “We have transported 15 injured to Peshawar but condition of 15 to 20 injured people were critical,” Wazir said and warned that the death toll could rise.

Prime Minister Nawaz Sharif called for security to be beefed up across the country as he condemned the attack, saying that no Muslim could ever imagine committing such a “horrific” act.

Pakistan has seen a dramatic improvement in security in the last two years, but groups such as the umbrella Pakistani Taliban and other extremist outfits still retain the ability to carry out attacks.

Local lawmaker Sajid Hussain Turi, the owner of the market, said bazaars in Parachinar had been barricaded off and vehicles banned from the area after multiple attacks have hit the city this year.

Parachinar was the location of the first major militant attack in Pakistan in 2017, a bomb in a market which killed 24 people in January and was claimed by the Pakistani Taliban. In March a second Taliban attack killed a further 22 people. There was no immediate claim of responsibility for Friday’s attack.

Kurram, one of Pakistan’s seven semi-autonomous tribal districts, is known for sectarian clashes between Sunnis and Shias, who make up roughly 20 percent of Pakistan’s population of 200 million.

The twin blasts in Parachinar followed a bombing earlier in the day in Quetta, capital of insurgency-wracked Balochistan province, that killed at least 13 people. Investigators said the attack targeted police. It was claimed by both the local affiliate of the Islamic State group and by Jamaat-ul-Ahrar, an offshoot of the Pakistani Taliban, according to the SITE monitoring group.

There was no immediate explanation for the dual claims. Islamic State Khorasan Province, the Middle Eastern group’s affiliate in Afghanistan and Pakistan, has been known to work with the myriad of Pakistani militant groups in previous attacks, including with Ahrar.

Officials at the city’s Civil Hospital said at least 13 people were killed and around 20 injured, mostly by shrapnel. Police officials said nine policemen were among the dead.

At the hospital in Quetta, worried children stood by the bloodstained cots of wounded relatives, and Pakistani soldiers visited injured colleagues. Stunned survivors could give few details about the attack. “I was sitting on a chair. There was an explosion. I got injured and fell down,” said one victim, Gulzar Ahmad.

Pakistan has waged a long war with militancy, but security has markedly improved in the country since its deadliest-ever terror attack, an assault on a school in Peshawar in which Taliban gunmen left more than 150 people dead, most of them children. That attack shocked a country already grimly accustomed to atrocities, and prompted the military to intensify an operation in the tribal areas targeting militants.

The Army has also been fighting in mineral-rich Balochistan, the country’s most restive province, since 2004, with hundreds of soldiers and militants killed. Its roughly seven million inhabitants have long complained they do not receive a fair share of its gas and mineral wealth, but a greater push by Pakistani authorities has reduced the violence considerably in recent years.