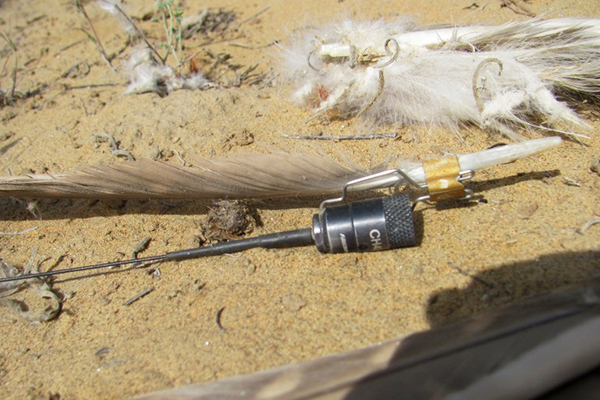 Border-security forces in Rajasthan say the dead bird, equipped with a camera, may have been working for a Pakistani spy agency.

Border-security forces in the Indian state of Rajasthan discovered the body of a dead falcon, which had been saddled with a small camera, sparking fear that the bird may have been used by Pakistan for espionage.

“It was fitted with some device and an antenna,” a senior Border Security Force officer stationed in Rajasthan said, on condition of anonymity, over telephone. The carcass was discovered near Jaisalmer, the ancient fort city in the far west of the desert state where Indian armed forces regularly conduct drills and war games.

Initial suspicions were that the bird might have been used for military spying, but the camera did not appear sophisticated enough. This may instead have been the work of Pakistani hunters, said the official. “However, the possibility of it being an espionage attempt from Pakistan cannot be ruled out at this stage,” he added. An investigation is being carried out.

This is not the first time that Indian border personnel have suspected Pakistan of using birds for spying purposes.

On May 27, 2010, Indian police detained a pigeon after it was caught on an alleged spying mission. Local officers in Indian Punjab, which lies to the north of Rajasthan, said the white bird had a ring around its foot that could be used to carry notes, and a Pakistani phone number and address stamped on its body in red ink. The pigeon was arrested at the behest of concerned citizens. But India treated the accused well: the pigeon was held in air-conditioned‚ armed custody at Ramdass Police Station‚ and underwent medical and other tests.

Press reports from India at the time quoted police officials as saying they could not rule out the involvement of Pakistan’s top spy agency‚ Inter-Services Intelligence‚ with some speculating that the bird could have been carrying a message for some sleeper cell in India.

But the truth was simpler. Times of India quoted a pigeon enthusiast as saying that the information stamped on the pigeon’s body was simply for verification purposes. Trainers on both sides of the border mark their birds with source information as well as the breed. For what it is worth‚ the enthusiast said Pakistani-trained pigeons fetch a good price for traders in India because they are better trained and have longer flying range. Sometimes pigeons on either side stray into enemy territory‚ and get captured.

The pigeon was handed over to Indian wildlife authorities after a day’s detention.

As if we don’t have enough else to worry about!!!….

There is nothing to read, trying to make a mountain of nothing

Interesting. Please note how the article does not quote any ‘spy fear’ facts having been established at any stage in any of the two bird episodes other than ‘speculations’ of people in India. No substance and yet a lot of sensation that could easily have fuelled negativity in an average reader against Pakistan. Objective achieved, I guess. On this note, I protest against such journalism being absolutely irresponsible.