by AFP and Newsweek Pakistan September 14, 2014 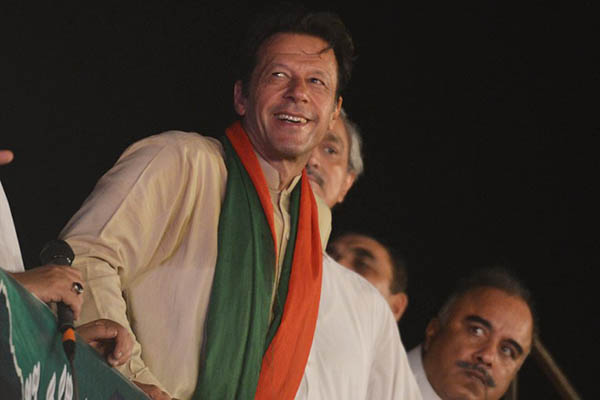 Talks to end a month long sit-in by anti-government protesters in Islamabad were deadlocked on Saturday after authorities arrested dozens of demonstrators, some of whom were accused of storming a TV station.

Cricketer-turned-politician Imran Khan and populist cleric Tahir-ul-Qadri have gathered thousands of supporters in Islamabad since Aug. 14, calling on Prime Minister Nawaz Sharif to resign over what they claim was massive rigging of the 2013 elections.

Interior minister Chaudhry Nisar Ali Khan confirmed that the government had detained several people for storming the state-run Pakistan Television (PTV) building earlier this month. “Around 20 people have been identified among those who attacked the PTV building. We have arrested seven of them,” Khan told a news conference.

The arrests prompted Imran Khan’s Pakistan Tehreek-i-Insaaf (PTI) party to cancel talks aimed at ending the crisis.  Addressing a charged crowd in front of Parliament to mark their 30th day of protest, Imran Khan said further talks had to end following the arrest of his workers.

Meanwhile, thousands have gathered for the last month inside Islamabad’s restricted ‘Red Zone,’ sparking frequent clashes with the police. “We arrested some people while they were leaving the protest site,” the interior minister said of the latest arrests, adding that 11 people armed with guns were also arrested.

Radio Pakistan reported that an Islamabad court sent over 100 people to jail on a 14-day remand for attacking state institutions and violating a ban on public gatherings in the capital. Among those detained was a popular PTI DJ who plays music during Imran Khan’s speeches and attracts large crowds of youths dancing to his beats at the regular rallies.

After the arrests, some PTI leaders and workers gathered in Islamabad’s district courts in a failed attempt to stop the transportation of their colleagues to jail.

Tahir-ul-Qadri, chief of his own Pakistan Awami Tehreek (PAT) party also announced he had suspended negotiations alleging that 12 of his personal guards were also arrested.

On Sunday, a court in Islamabad ordered the release of PTI workers arrested under Section 144, and also granted bail to two PTI leaders—Azam Swati and Shibli Faraz. The interior minister issued a statement confirming that it would comply with the orders and release the arrested workers. There has been no word on whether this will lead to resumption in talks.

Several rounds of talks have been held between the government, opposition groups and the two protesting parties to find a solution to the crisis. Although Khan and Qadri claim the 2013 elections were massively rigged, local and foreign observers said the polls were credible.