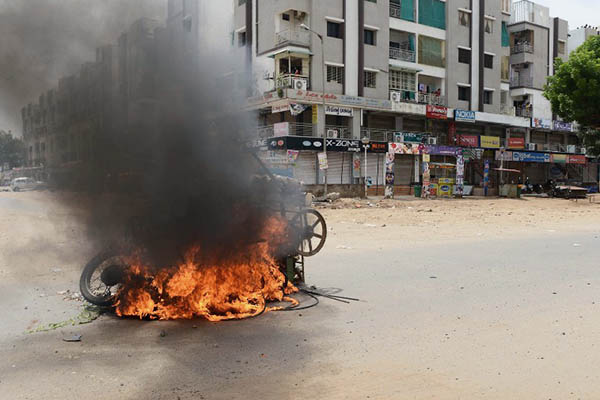 At least nine people have died in the worst violence to hit Narendra Modi’s home state in more than a decade, police said Wednesday, as the Indian prime minister appealed for calm.

Authorities in western Gujarat state said the army had been deployed to try to restore peace after a mass rally turned violent, with protesters torching cars, buses and police stations. The violence appears to have been triggered by the detention late Tuesday of the 22-year-old leader of a mass movement by the Patidar or Patel caste demanding preferential treatment for jobs and university places.

Director general of police P. P. Pande told AFP three people had been killed in the main city of Ahmedabad, where an estimated half a million people gathered for a rally on Tuesday. The violence later spread to other parts of the state and another two people were killed when police opened fire on rioters early Wednesday in Banaskantha district.

The police late Wednesday said that the seventh victim was a police constable, who was beaten by a mob and later succumbed to his injuries in hospital. Two others injured in the rioting, including a 30-year-old man detained by the police, succumbed to injuries late Wednesday, Ahmedabad police inspector P. D. Parmar told AFP.

“I appeal to all brothers and sisters of Gujarat that they should not resort to violence,” Modi said in a statement. “Violence has never done good for anyone. All issues can be resolved peacefully through talks,” said Modi, who served as the state’s chief minister for more than a decade, in a television address delivered in his native Gujarati.

Media reports said it was the first time the army had to be deployed in Gujarat since religious violence in 2002 that left more than 1,000 people dead, most of them Muslims.

The streets of Ahmedabad were deserted on Wednesday with schools, shops and businesses closed. But some protests continued in Surat, the center of India’s lucrative diamond trade, where local media said police used tear gas to disperse demonstrators.

Political leaders appeared to have been taken by surprise by the scale of the protest movement, which began earlier this year but has rapidly gathered pace in recent weeks. The Patidars or Patels are one of the state’s most affluent communities, but they say they are struggling to compete with less privileged castes for jobs.

India sets aside a proportion of government jobs and university places for Dalits, known as “untouchables,” and for so-called “other backward castes” under measures intended to bring victims of the worst discrimination into the mainstream.

“Gujarat has a long history of communal violence going back decades, but this phenomenon is something entirely new,” said Sandeep Bamzai, a veteran political analyst and journalist. “Every observer is mystified by this 22-year-old boy who is leading the agitation and has acquired a cult status in so little time.”

It remains unclear how Hardik Patel, the 22-year-old self-styled leader of the movement, managed to mobilize such huge numbers. State authorities have already ruled out granting the Patidars’ request.

But their firebrand leader, who was briefly detained on Tuesday but has since been released, has vowed to keep up the pressure. “This is a fight for our rights… we will continue with our campaign on the roads and the streets,” he said in a television interview Wednesday.

At least a dozen officers were injured in Tuesday’s violence, prompting the first curfew in the state since 2002. “There was heavy stone pelting of police vehicles and torching of police stations in Unjha and Kalol towns,” said Gujarat’s most senior police officer P. C. Thakur.

As many as 100 buses were torched and property damaged in the violence in the cities of Ahmedabad, Surat and Mehsana and the towns of Unjha and Visnagar, senior local officers said.