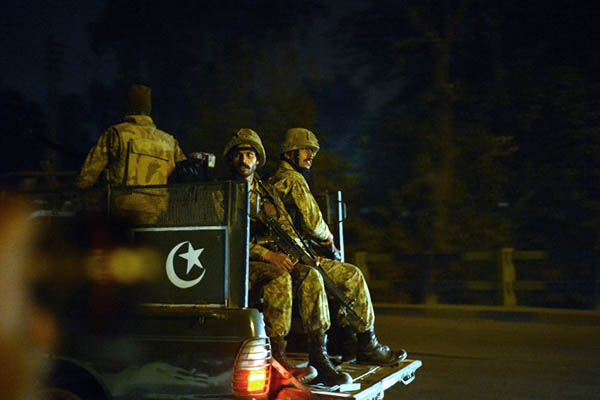 A military tribunal on Thursday announced the death penalty for six militants linked to an assault on a school in Peshawar that killed 151 people, mainly students, in the country’s deadliest terror attack.

A seventh man was handed a life sentence.

“The convicts were given fair trial by following all the legal formalities and offering/providing them legal aid and defense counsels. Today the sentences of death have been confirmed by the Chief of Army Staff,” a statement issued on the military’s website said, adding they had a right to appeal. The statement listed the convicts by name and carried a brief description of how each had carried out various tasks such as collecting funds, transporting or harboring suicide bombers for the attack.

Their trial took place behind closed doors, with no information on where or when they were held or how proceedings unfolded. The Army also announced it would execute another man for carrying out an attack on soldiers in Karachi in March that killed three.

The attack on the Army Public School in Peshawar led to widespread outrage, with officials announcing a slew of measures aimed at combatting terror. The government lifted a six-year moratorium on executions—initially only for people convicted of terrorism but later extended to all capital offences, with around 180 hanged so far.

Pakistan also amended its Constitution to allow military courts to try terror suspects. Despite previously having specific anti-terror courts, cases dragged on for many years and many suspects escaped punishment due to legal loopholes or lack of witnesses, who would often not appear out of fear of repercussions from militant groups.

In February, military spokesman Maj. Gen. Asim Bajwa said the Army had taken 12 Taliban into custody in connection with the school attack, adding that 27 conspirators were involved in total. The military courts handed down their first death sentences to six militants in April for various “heinous” offences relating to terrorism, kidnappings and suicide bombings. But the courts have also been criticized for their lack of transparency, and their legality was challenged in the Supreme Court.

The challenge was overruled last week, with Chief Justice Nasir-ul-Mulk ruling that the judiciary did not have the power to strike down constitutional amendments made by the elected Parliament.