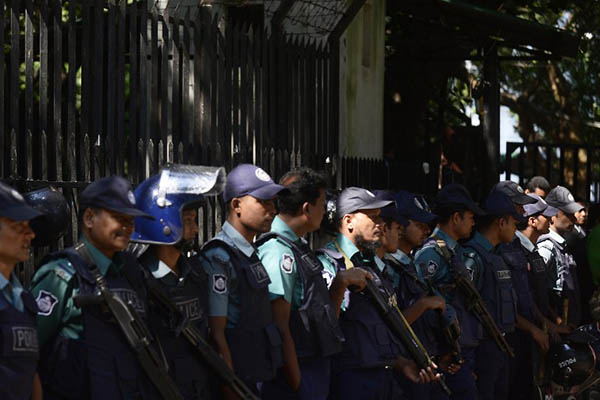 Activists of the Jamaat-e-Islami in various cities have clashed with police to protest Motiur Nizami’s sentencing.

Jamaat-e-Islami supporters clashed with police in several Bangladesh cities on Thursday as part of a nationwide strike to protest against their leader being sentenced to death for war crimes, police said.

Demonstrations and sporadic clashes also erupted in about a dozen other towns and cities, local media reported, as Jamaat supporters took to the streets to enforce the three-day strike starting on Thursday.

The clashes came one day after a court convicted Motiur Rahman Nizami, the leader of Jamaat since 2000, of mass murder, rape and looting during the 1971 war of independence against Pakistan. The war crimes tribunal sentenced Nizami to death for his role as head of a notorious pro-Pakistani militia blamed for killing some of the country’s top intellectuals, doctors and journalists.

Similar verdicts against some of Nizami’s top lieutenants plunged the nation into one of its worst crises last year as tens of thousands of Jamaat activists clashed with police, leaving hundreds dead.

Jamaat called the strike in protest, accusing the secular government of ordering the trials against its leaders as part of a witch-hunt against opposition figures.

On Thursday schools, colleges and private businesses were shut across the country as the strike took hold. Highways were deserted as inter-city bus and lorry services ground to a halt, while deliveries from ports were suspended.

Police also fired rubber bullets at protesters in Rajshahi and the northern town of Mithapukur after they tried to block roads, said police officials, adding that the Rajshahi head of Jamaat was arrested on charges of planning subversive activities.