by AFP and Newsweek Pakistan September 22, 2013 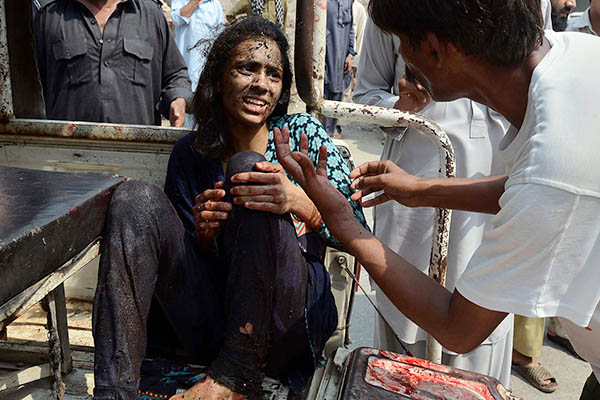 At least 77 people were killed, and over 100 others injured in two suicide bombings targeting a church service in Peshawar on Sunday morning.

“Two suicide bombers managed to enter the Kohati Bazaar Church on Sunday morning,” said Peshawar police superintendent Muhammad Ismail. They detonated their suicide jackets after the service ended, added Peshawar Commissioner Sahibzada Anees. “Most of the wounded are in critical condition,” he said, adding special security had been deployed to protect the church.

“We are in an area which is a target of terrorism and within that area there was a special security arrangement for the church. We are in a rescue phase and once it is over we will investigate what went wrong,” he added, as grieving relatives gathered outside the church and shouted slogans against police over the security lapse.

The dead and injured were rushed to the nearby Lady Reading Hospital. Earlier, Arshad Javed, the chief executive of the hospital, said: “So far 61 bodies and 120 injured have been brought to the hospital, including women and children. A majority of the victims are in critical condition.”

Confirming the nature of the blast, an official of the bomb disposal squad, Abdul Haq, said: “Around 6-8 kilograms of explosive material was used in the suicide bombing.”

The walls of the church had been pockmarked with ball bearings, which are often used in suicide bombings to maximize the damage done by the attack.

“We were praying inside. As soon as the prayers finished, while people were greeting each other, an explosion occurred, scattering bodies all around me,” said Ehsan Fawad, an eyewitness. Other eyewitnesses said there had been at least 400 people within the church at the time of the explosion.

The Tehreek-e-Taliban Pakistan’s Jandullah group has claimed responsibility for the blasts. Ahmed Marwat, a spokesman of the group, told Newsweek the attack was in retaliation for drone strikes. “Until and unless drone strikes are stopped, we will continue to strike wherever we find an opportunity against non-Muslims.” The militant group had earlier claimed responsibility for attacking foreign mountain climbers in Gilgit-Baltistan, and for an attack on an Inter-Services Intelligence (ISI) compound in Sukkur.

Expressing deep sorrow and shock, Prime Minister Nawaz Sharif condemned the blast. “Terrorists have no religion and targeting innocent people is against the teachings of Islam and all religions,” he said. “Such cruel acts of terrorism reflect the brutality and inhumane mindset of the terrorists.” He expressed his solidarity with the Christian community and deep sympathies with bereaved family members.

It was one of the deadliest attacks in several years on Christians in overwhelmingly Muslim Pakistan. Only two percent of the country’s 180-million population is Christian. The community is largely poor and complains of increasing discrimination. The U.S. Commission on International Religious Freedom has warned that the risk to Pakistan’s minorities has reached crisis level.