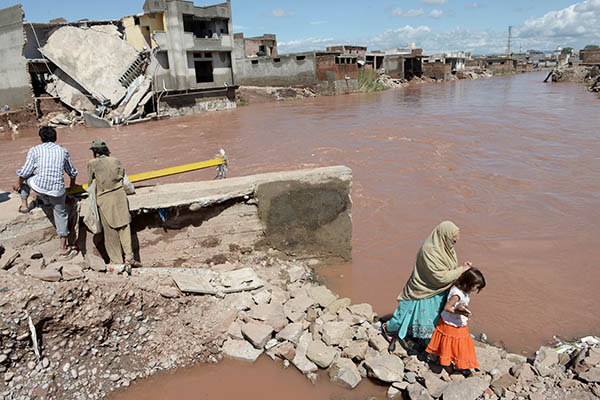 Nearly 200 people have died and over 350 injured due to flooding caused by torrential monsoon rains in Punjab, Pakistan-administered Kashmir and Gilgit-Baltistan, according to Pakistan’s National Disaster Management Authority.

“In Punjab, the majority of casualties have been caused by roof collapses, electrocution and related incidents,” said Ahmed Kamal, a spokesman for the NDMA. “According to data collected from various hospitals across the province, 254 civilians have been injured in Punjab,” he said. In addition, 548 houses have been partially damaged, were 53 have been completed destroyed. The NDMA has established 126 relief camps in Punjab province to cater to the displaced.

According to Kamal, 63 people have died in Pakistan-administered Kashmir, with 105 injured. The damage to property has been more extensive, with 1,785 houses completely destroyed and 3,712 partially damaged. He said 11 people had been reported dead in Gilgit-Baltistan and five had been injured.

The Punjab government announced a “flood emergency” throughout the province on Sunday. “The chief minister of Punjab, Shahbaz Sharif, directed the authorities concerned to expedite the relief work for the rain and flood affected people,” it announced in a statement issued to the media. In addition, Prime Minister Nawaz Sharif visited affected areas in Sialkot and conducted an aerial survey of Pakistan-administered Kashmir. He also urged anti-government protesters in Islamabad to help provide relief to the flood affected.

Pakistan’s Foreign Office, responding to a question on flooding across the Line of Control in India-administered Kashmir, said the government and people of Pakistan expressed their condolences over the deaths of their Kashmiri brethren. “We also feel the pain of the people of India-administered Kashmir and are ready to help in whatever way possible to mitigate the suffering of the people affected by the floods,” it added.

Over 150 people have been killed due to flooding in India-administered Kashmir and Prime Minister Narendra Modi, on Sunday, wrote to his Pakistani counterpart and offered assistance for relief efforts. “It is a matter of great distress that retreating monsoon rains have played havoc in many parts of our two countries. My heart goes out to the affected people and my deepest sympathies are with them and their families,” he said.