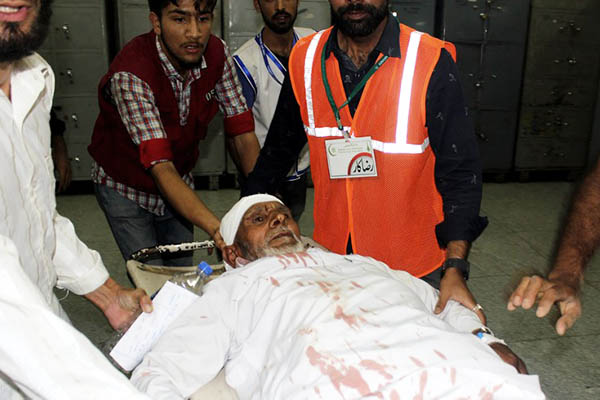 At least 38 people have been killed in the past week, while thousands more have been injured.

Two people including a teenager were killed on Friday as clashes spread in India-administered Kashmir despite a curfew, with the death toll reaching 38 in a week, officials said.

The teen died, while three protesters were critically wounded, when Indian soldiers opened fire on an angry group that attacked their camp with stones in the frontier Kupwara area, a police officer speaking on condition of anonymity told AFP. “What would the soldiers do? They fired in self-defense,” the officer said.

Another young man died when police fired live bullets at a group of protesters who set fire to a police station in the southern village of Yaripora after someone lobbed a grenade wounding five police, one of whom was in a “critical condition” another officer said.

The death of popular rebel leader Burhan Wani in a gunfight with government forces last week sparked clashes in which more than 3,000 people, including about 200 police officers, have been injured. Protesters have torched armored vehicles and attacked military camps that dot the restive region, where many deeply resent the presence of an estimated half a million Indian troops.

Fearing large-scale protests after Friday prayers, authorities had warned that nobody except medics and ambulances could be allowed to move on the streets, but government forces at scores of places fired tear gas, pellet shotguns and live bullets at hundreds of demonstrators who defied the curfew, a senior police officer said requesting anonymity.

Internet and mobile networks across large parts of the territory remained suspended for the seventh day running, but the blocks have not stopped the spread of unrest. It is the worst civilian violence to hit the region since 2010, when mass protests broke out and left 120 dead.

Hospitals in the main city of Srinagar have struggled to cope with the rush of wounded, hundreds of them with severe injuries in their eyes.

New Delhi on Thursday rushed a team of eye specialists to help treat the injured many of whom they said would be partially or fully blind. “We have not seen these many and these kinds of injuries to eyes anywhere,” Dr. Sudershan Khokhar, who heads the team of ophthalmologists, told reporters in the city’s general hospital where more than 100 eye operations have been performed since Saturday.

Kashmir has been divided between rivals India and Pakistan since 1947, but both claim the territory in its entirety. Tens of thousands of people, mostly civilians, have died in the fighting since 1989, when the armed rebellion against Indian rule erupted.

As a sign of escalation following Friday’s violence the resistance leadership opposed to Indian rule of the disputed Himalayan territory extended an ongoing strike for another three days.