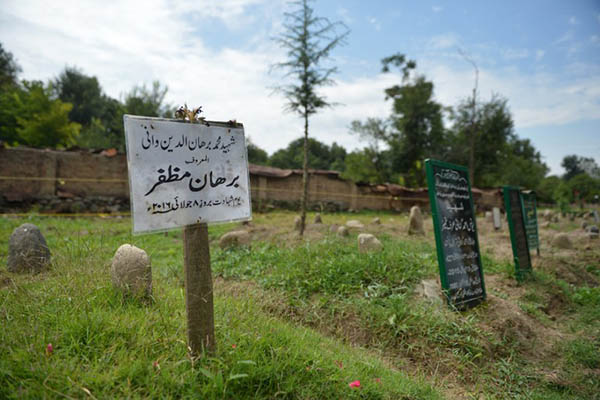 One was the poster boy of Indian-administered Kashmir’s uprising, the other a seemingly random victim of a surge of violence that shows little sign of ending. But as Muslims elsewhere in India began celebrating Eid on Tuesday, the families of Burhan Wani and Riyaz Ahmed Shah started their day with a trip to a martyrs’ cemetery, united in grief but with vastly different reflections on their losses.

“When Burhan left us, he left for the cause and became the son of the whole of Kashmir, so I constantly thank God it was my son who was sacrificed,” said Muzaffar Wani as he spoke calmly of his son’s death in a gun battle with soldiers.

Gulping back tears, Shah’s sister Amina tells a very different story; overwhelmed by the thought that her 22-year-old brother’s life had been cut short after being shot for no apparent reason on his way home from a shift as a security guard. “Riyaz never took part in the protests, he never even picked up a stone. He was very responsible, all he ever wanted to do was put food on the table,” said Amina at the family’s home in Srinagar. “We have still not come to terms with what happened, our hearts are restless,” added her older sister Shahina, describing her family’s Eid that included a trip to Riyaz’s grave in a section of the local cemetery reserved for “martyrs.”

The usual Eid feast of mutton and chicken would be replaced by dhal and rice. “We will be praying for all those who have been injured or martyred…the entire Kashmir nation is in mourning.”

Around 80 Kashmiris have died in the two months since Wani was killed on the southern edge of the region, making it one of the worst bouts of violence since a full-blown armed rebellion was at its peak in the 1990s. All efforts to thwart the unrest have failed, and anger towards their rulers shows every sign of escalating in what is India’s only Muslim-majority state.

Fearful that large-scale congregations could morph into mass protests against Indian rule, authorities have banned prayers at Srinagar’s main mosque. Helicopters and drones buzz over the city, while Internet and mobile networks have been cut.

With virtually all shops shuttered for weeks, wrecking what should be one of the busiest times of the year for retailers, few families will be exchanging gifts or enjoying lavish feasts. While the shutdown was initially imposed by the Indian authorities, retailers have extended the shutdown in response to calls by separatist groups.

In Wani’s hometown of Tral, normal life has come to a standstill with schools shut and public transport suspended since his killing on July 8. One of the few hives of activity is the family home where Muzaffar Wani still receives a steady stream of visitors paying their respects to a rebel leader who has arguably become more potent since his passing.

He was the second son to have died at the hands of Indian forces, with his older brother Khaled allegedly tortured to death in April last year after being intercepted on his way back from a clandestine meeting with his brother.

Muzaffar Wani told AFP there would be Eid celebrations but he was heartened that his sons have managed to galvanize the separatists’ cause. “I’m proud of their sacrifices… of course I’m sad as well and try not to talk about it too much in case it weakens my resolve,” said Wani, who also began his day by visiting his sons’ graves.

Burhan and Khaled account for two of the 45 plots in Tral’s martyrs graveyard, all of whom have died in the separatists’ cause since independence.

Speaking in front of a poster proclaiming “Burhan, your blood will bring about a revolution,” Muzaffar Wani recounted how his then 15-year-old son left home to join the Hizbul Mujahideen, angered by a beating that soldiers dished out to his brother. Over the next eight years, he would occasionally sneak home at night before rejoining his fellow militants in a group that supports Kashmir becoming part of Pakistan.

Since independence from Britain seven decades ago, India and Pakistan have both claimed sovereignty over the whole of Kashmir, which is divided by a de facto border. Two of their three wars have been fought over the Himalayan territory.

In Tral, Pakistani flags fly from rooftops while graffiti denouncing “Indian dogs” or glorifying “our hero Burhan” are ubiquitous. Some members of the security forces admit that authorities underestimated the impact of killing Wani, a dashing 23-year-old who built up a big following on social media as he posed with an AK-47.

While Wani’s killing has fanned the separatist cause, a senior police official acknowledged that Shah’s shooting had exacerbated the divide between the security forces and an alienated civilian population. He died when pellet gunshot fired at close range tore through vital organs.

There was no record of stone throwing and he was on a scooter, said the officer, speaking anonymously. “There can be no justification.”