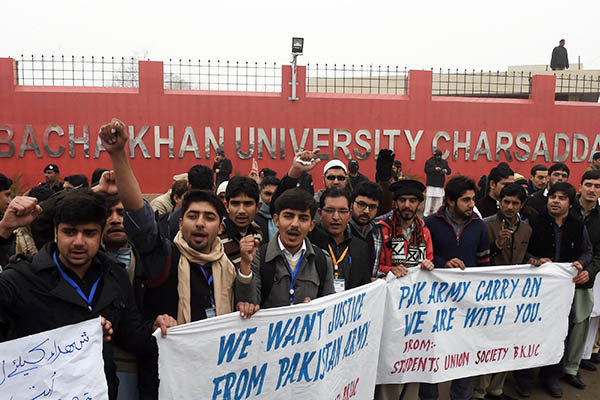 Putting NAP (and criticism) in perspective.

Since the Jan. 20 attack on Bacha Khan University in Charsadda, there’s been debate on the National Action Plan and whether it has been—or is being—effectively implemented.

Much of this debate unfortunately is on TV, not the best platform for nuanced analysis, especially when guests sit on panels primarily to score political points.

The refrain is, NAP hasn’t been implemented. Nary anyone says what hasn’t been implemented and why. No one realizes that even if, by some miracle, NAP had been implemented effectively, that in and of itself might not have prevented the attack on BKU. The entire debate reminds me of Harold Pinter’s The Caretaker with its choppy dialogue, long rants and non sequiturs. Like Davies’ fortunes connected to his shoes, somehow if we can manage NAP, all will be fine.

In which case, let’s go point by point through NAP to see what has been done and what hasn’t, to try and put a rational construct on the debate. So, here goes:

As should be evident, points 1 and 2 are linked and have been implemented. Without going into the debate over whether military courts should have been established, they have been, through a constitutional amendment, which puts a two-year sunset clause on their life and functioning. They are working, trying, and sentencing suspected terrorists. Many have already been executed. To that extent, NAP has been implemented.

The commitment is implemented legally and procedurally. Practically and operationally, however, many of these organizations continue to operate and attack the state, as designated terrorists. Their cadres are either underground, remain undetected or have run away to Afghanistan. The military and law-enforcement agencies continue to operate against them through military and intelligence-based operations. We can say that the state is implementing the policy in a contested environment where terrorist groups continue to challenge its writ. Clearly, number 3 as a guideline is not something that can change the ecosystem overnight. It simply denotes consistent effort toward that end.

This is one of the most contentious points and one on which the government needs to be hammered on its head. That said, a simple reference to NACTA means nothing because NACTA can never be effective as a standalone concept. Put another way, we can’t say NACTA and (voila!) the serpent will disappear. NACTA has to be seen as one part of the broader National Internal Security Policy, which was presented to parliament on Feb. 25, 2014 but remains stillborn. The Policy had other features like a Joint Intelligence Directorate and quick-reaction Counterterrorism Forces. It also envisaged, though not clearly, the establishment of an umbrella organization to coordinate these activities. None of that has happened so far. The National Internal Security Policy wasn’t perfect but it could be a good starting point. The government can be genuinely criticized on this score.

Work has been done on this score in a slipshod and shoddy manner. Firstly, there’s no clear definition of what constitutes ‘hate’ speech and how to correlate cognizably someone’s words with someone else’s illegal or murderous action(s). Also, there is the problem, in the absence of a reasonably clear definition, of how to square Article 19 of the Constitution with ‘hate’ speech. [NB: and I am not even going into the provisos that follow “subject to…] A recent incident of the arrest of a vendor in Lahore’s Hafeez Center for displaying an abominable notice against the Ahmadiyya and subsequent protests against his arrest is a case in point. Even so, the police has been acting against such material in the cities. That there is a backlash from the people shows the degree of difficulty, as also the fact that this is a measure against extremism more than terrorism and extremism is a medium- to long-term problem.

There’s greater vigilance on this count and laws and procedures have been tightened. That said, much of such financing happens outside the banking channels, especially through hawala that is very difficult to intercept through these procedures. In fact, a particular hawala chain gets disrupted through CT arrests rather than through financial tracking per se. There are other aspects of this debate that are outside the scope of this piece. Corollary: measures have been taken. The success percentage may or may not be very impressive.

As should be obvious, this can only be implemented once the state has managed to take effective control of physical and ideological spaces. Currently, the only implementation tool is to declare an organization a terrorist entity and proscribe it and when it reemerges to proscribe it again. If the critics have a better implementation tool, they must put it on the table.

Efforts have been made and continue to be made to create special CT forces but there’s more emphasis on training for fire-fighting, which is just the tail-end of the process. Scant effort has been made to understand that CT is to be looked at as a holistic process and requires fusion of many activities before a CT force arrives at the point of fire-fighting. Again, the idea of fusion would require a separate discussion. However, the criticism on this point, if any, is perfectly justified since doing so requires a conceptual-structural understanding of the process and can—and must—be done.

This measure, again, belongs more in the category of fighting extremism than terrorism. Not much work has been done, or can be done, here without first capturing the ideological space. That’s a long-term, long-haul process. However, in the short-term the state must take measures against individuals or groups that are involved in any action that seeks to persecute minorities.

Efforts are being made in this direction but the pace is slow for politico-ideological reasons and compulsions. The criticism on this point is perfectly justified.

Directives have been issued by PEMRA and the press council. The language is vague and much of this advice, in the way in which it is formulated, is problematic from the viewpoint of reporting and analysis. Put another way, this is a point on which government’s implementation has been criticized as sweeping and ham-handed—not lacking in implementation but sophistication.

There’s perfectly justified criticism of the government on non-movement on FATA reforms despite an all-party consensus on what needs to be done. The government needs to move fast on this. The return of IDPs is essentially linked to the problem of reform and is not simply a matter of security.

This measure is essentially linked with the counter-terrorism part of NAP. The efforts to this end have been partly successful. However, many of these groups, loosely or tightly coupled with TTP, are now based in Afghanistan and disrupting and dismantling their communication networks is not entirely possible with our current capabilities. There’s also the cyber part of this disruption, which is contained in the point that follows.

This is another area where the government has tried to move fast with its Cyber Crimes Prevention Bill. The criticism here is not about lack of implementation but creating a legal regime whose provisions are being criticized by rights and civil society activists, as also ISPs and Telcos. It’s a classic example of the tension between security and privacy. This tension is not peculiar to Pakistan. It is being debated even in Western Europe and North America. The bill hasn’t been passed yet.

Hundreds of suspected terrorists have been arrested and are being prosecuted.

The operation has brought down the level of violence but has got stuck in political bickering and expediencies. The pace has slowed down and it is likely to fall short of its objectives unless the priorities are reworked. That is easier said than done and involves political compromises.

Balochistan has been partial success. The terrorist organizations like BLUF, BLA, BRA etc have been degraded to a large extent. That has created the political space for efforts toward reconciliation. However, one of the most important problems, forced disappearances, continues. Without reasonably addressing it and holding intelligence agencies accountable, matters could slip back. That would mean another cycle of violence.

This is being actively pursued. Some of the worst sectarian terrorists have been arrested or even “encountered”.

Efforts are being made but the scope of the problem and its spread is very wide. Also, Kabul is not interested in repatriation of its nationals at this point, given that the government there is slipping on all important indicators of governance. There’s also the problem of children born in Pakistan and the fraudulent acquisition of Pakistani NICs by Afghan refugees. It is, to put it mildly, a royal mess.

Almost nothing has happened on this front as far as reforming the criminal justice system is concerned. Empowering CTDs to intercept communications is linked to other CT measures that were contained in the NSIP, which remains in limbo.

This is a quick overview of what has happened, what hasn’t and what possibly is unlikely to happen soon. There are two sets of problems: the inability to move on structural reforms where the criticism is justifiable, and the complex parts of the problem where the criticism must put matters in perspective. Every one of these points can be debated separately and at length. That has not happened so far.