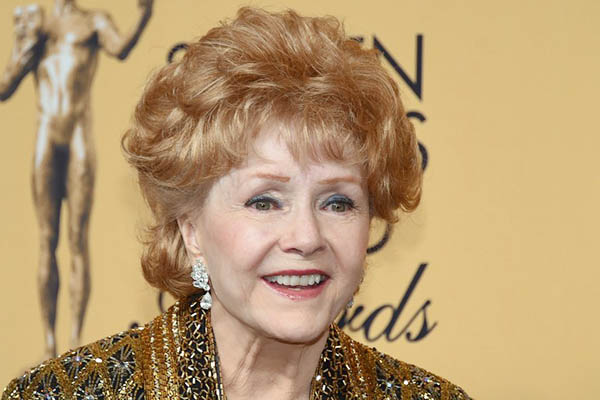 Famed actress passed away one day after her daughter Carrie Fisher.

Debbie Reynolds, the Singin’ in the Rain actress who tap-danced her way into American hearts as a star of Hollywood’s Golden Age, died on Wednesday, grief-stricken over daughter Carrie Fisher’s death a day earlier.

The 84-year-old suffered a stroke at son Todd Fisher’s Beverly Hills home after telling him “I miss her so much, I want to be with Carrie,” he was quoted as telling celebrity news website TMZ.

Reynolds was the girl-next-door lead of a string of hit musicals in the 1950s after being discovered by MGM studio bosses at a beauty contest in southern California, going on to earn an Oscar nomination for playing the title role in 1964’s The Unsinkable Molly Brown.

“We have lost a unique talent and a national treasure. Coming so close to the death of her daughter, Carrie Fisher, this is truly a double tragedy,” Screen Actors Guild president Gabrielle Carteris said in a statement. “Their imprint on our culture is profound, and they both will live on.”

Reynolds is best remembered as sweet but shy voice artist Kathy Selden in Singin’ in the Rain (1952) and holding her own despite being cast opposite tap-dancing superstar Gene Kelly, who was more than twice her age.

Off-screen, she was known as the wronged party in one of Hollywood’s most notorious scandals, when her husband, singer Eddie Fisher, left her for her friend and fellow screen icon Elizabeth Taylor.

Reynolds’ daughter Carrie Fisher, who catapulted to worldwide stardom as rebel warrior Princess Leia in the original Star Wars trilogy, died in Los Angeles on Tuesday, four days after suffering a heart attack on a transatlantic flight. Media reports said Reynolds had been at her son’s house to discuss funeral arrangements.

Fans and fellow celebrities struggled to come to terms with another devastating blow so soon after Fisher’s death. “Debbie Reynolds was one of the last of Hollywood Royalty. It breaks my heart that she is gone,” Star Trek actor William Shatner said on Twitter. He added, referencing the long string of celebrity deaths this year: “I’d hoped that my grieving was done for 2016.”

“There is nothing harder than having to bury a child. Debbie died of a broken heart, but she’s with her daughter now,” tweeted Shatner’s Star Trek co-star turned social media personality George Takei.

“Dear Debbie Reynolds, I totally get it. Hug her so tight for all of us,” added Charmed and Who’s the Boss actress Alyssa Milano.

Reynolds, who received a humanitarian award at the Academy’s “Honorary Oscars” last year, was just 19 when she got her big break in Singin’ in the Rain, which celebrates Hollywood’s transition from the silent era into “talkies.”

Her 2013 autobiography Unsinkable: A Memoir detailed the highs and lows of her rocky personal life and a career which was still going strong into her 80s as she performed her one-woman stage show. “Singin’ in the Rain and childbirth were the hardest things I ever had to do in my life,” she wrote in an earlier autobiography entitled Debbie.

Reynolds was known at one time as the foremost collector of Hollywood memorabilia. Taylor’s Cleopatra headdress and Marilyn Monroe’s billowing Seven Year Itch frock would become part of the 4,000-piece haul of costumes, props and furniture, most of which Reynolds eventually auctioned for more than $25 million.

Mary Frances Reynolds was born on April 1, 1932 in El Paso, Texas, the second child of railroad carpenter Raymond Francis Reynolds and his wife Maxine. Now synonymous with tap, Reynolds had never danced professionally, according to the Internet Movie Database, when picked to star in Singin’ in the Rain.

Several more MGM musicals followed, with Reynolds typically cast as a wholesome young heroine, before she turned to more serious screen acting, as well as a career on Broadway.

Married three times, Reynolds once said she had more luck selecting restaurants than men. First, she had to overcome the humiliation of losing Fisher to Taylor, although the two women remained close until Taylor’s death in 2011.

In another turn of misfortune, Reynolds’s second husband, shoe magnate Harry Karl, gambled away most of her savings. Her third marriage to real estate developer Richard Hamlett in 1985 wasn’t much more successful, ending in divorce in 1996.

To support the family, Reynolds performed at her casino in Las Vegas, where she housed her memorabilia collection until it shut in 1997.

Reynolds, admired for her versatility, starred in her own sitcom, The Debbie Reynolds Show, in 1969-1970 and was also known for her Emmy-nominated role as Grace’s quirky mother on NBC’s Will & Grace.

Her career in cinema was largely over by the 1970s, though she continued to star in TV movies and series. She also acted on stage and portrayed Liberace’s mother Frances opposite Michael Douglas in 2013’s Behind the Candelabra.

Bright Lights: Starring Carrie Fisher and Debbie Reynolds, a documentary about Reynolds’s at-times rocky relationship with her daughter, premiered at this year’s Cannes Film Festival and is due to air on HBO in March.