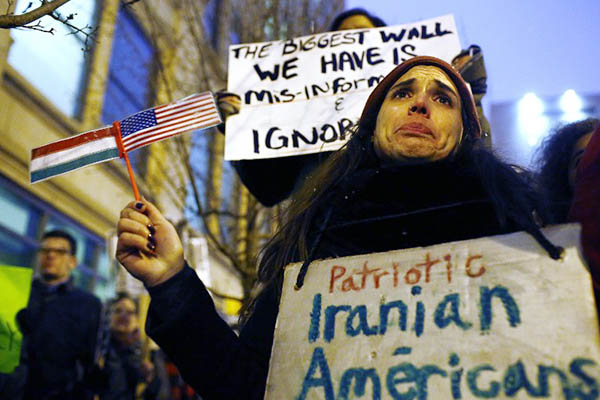 As U.S. President Donald Trump battles to reinstate his controversial revised travel ban, one overlooked effect has been the havoc wreaked on legal Americans with family abroad.

Across the United States, citizens not directly targeted by plans to halt entries from six majority-Muslim nations are nevertheless finding their lives disrupted and families torn apart. Iranian-American Madhis Keshavarz, whose father died on Feb. 16 with relatives unable to visit him in his U.S. hospital bed, is one such victim of the uncertainty.

“They stole from my father the chance to say goodbye to the ones he loved the most,” the Los Angeles resident told AFP, tears rolling down her cheeks.

Trump has said a travel ban is needed to preserve U.S. national security and keep out extremists. His first effort, in January, banned travelers from seven majority-Muslim countries and all refugees but was blocked by a court in Washington state on the grounds that it violated the constitution’s prohibition of religious discrimination. That block was upheld on appeal, and the administration said it would revise the ban to better adhere to the law.

It aims to close U.S. borders to nationals of Iran, Libya, Somalia, Sudan, Syria and Yemen for 90 days, and all refugees for at least 120 days. Iraq was on the original ban but removed in the revision. But the new executive order has run into the same problems in Hawaii and Maryland.

In the confusion over the initial executive order, Keshavarz’s uncle, a German citizen who has visited the U.S. some 30 times, found himself unable to get a visa to attend his brother’s deathbed, despite having his papers in order. “My father was an organ donor. Some American is now walking around breathing because of him, and he was denied the basic right to say goodbye to the ones he loved the most,” said Keshavarz, a media strategist.

One of her close friends, a Briton who has dual Iranian nationality but has not been there in more than a decade, encountered similar problems when she decided to come to the U.S. to support her grieving friend. As a British national she didn’t need a visa but sought advice anyway from U.S. consular officials in London.

“They said to her you need a visa. They took her British passport and kept it to review it. She had to wait to get her passport back, so missed her flight,” Keshavarz said. Other members of her family have also seen their lives disrupted.

“My young cousin who is engaged to be married hasn’t been able to see his fiancée since the end of last year,” Keshavarz said. “She’s been waiting for a visa to come and it’s on hold. Her status has been floating with no indication of it changing, despite a number of calls to all sorts of people, so all the planning of the wedding is suspended.”

She acknowledges that some of this bureaucracy already existed under the previous administration but adds that at least people knew the procedure, whereas “now embassies have no idea.”

Some 400,000 people of Iranian origin, often with dual citizenship, live in and around Los Angeles, among more than one million in total in the U.S. “I’ve always had tons and tons of problems. We never had it easy, even before Trump,” said Madhi Rahimi, 31, who works in a Silicon Valley I.T. research company. “It was always difficult to get the visas. It was always single entry so for many friends and me it meant not going home. That one time I went home it took me four months to come back to the U.S.”

Only his mother and younger brother have been able to visit in a decade spent in San Francisco, he says, and their applications took nine months to be approved.

Arash Saedinia, a 43-year-old Iranian American who teaches English literature, talks anxiously of a period of intense worry for his entire community. “Green-card holders are now reluctant to leave the country for a short trip to Mexico, to visit family or friends, to take a job overseas,” the LA resident said.

A list released at the end of 2015 by Persian Tech Entrepreneurs, a group of young Iranian Americans active in technology, showed that many members of the community had reached the top ranks of some of the most powerful players in Silicon Valley. Yet they are still “demonized,” says Keshavarz, even though many were forced to flee their homeland in the first place because of Iran’s CIA-backed 1953 coup.

“Whatever you do you are not viewed as being an American, not treated like one, and it’s tiresome,” she said. “It’s a very deep wound to have consistently to prove yourself and be deemed worthy of a citizenship.”