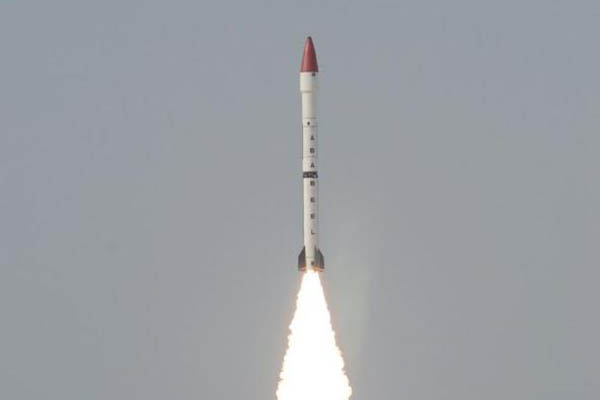 Pakistan and India cannot afford to ramp up their defense spending.

As a Pak-Indo parliamentarians’ dialogue hosted by the Pakistan Institute of Legislative Development and Transparency (Pildat) unfolded in Dubai, Pakistan let fly with its 2,200-kilometer-range Ababeel ballistic missile amid much self-congratulation.

Participants from both nations agreed that defense expenditure by the two nuclear neighbors would hamper the wellbeing of their people. India, growing annually at nearly 7.6 percent of its GDP, can ill-afford the status of the world’s largest importer of armament because of its menacing rich-poor gap. On the other hand, colossally indebted Pakistan, struggling to surpass 4 percent growth, is approaching the category where defense spending endangers the life of the common man.

Since both states are propelled by politics of rivalry—i.e. lawmakers win votes if they heat up overt and covert cross-border aggression—the reference to armament in Dubai was significant. But one can’t escape the conclusion that New Delhi’s lawmakers were less bothered by India’s shopping spree in the weapons bazaar. The Pakistani delegation appeared far more aware that tests such as the Ababeel missile do little to help the impoverished common man who voted in 2013 for peace rather than war.

America notched up by 4 percent its defense spending to GDP ratio after 9/11 to public acclaim, but by 2008—on the back of a global financial crisis—its economy was facing collapse. Any armament expenditure that surpasses 3 percent of a nation’s GDP usually hurts the man in the street. Then-president Obama had to start the rollback of Pax Americana during his tenure, which current President Trump looks to complete.

America spent itself out of its superpower status during the Iraq war. For India and Pakistan, rising nationalism may tempt New Delhi to risk its own financial health to tilt Pakistan into economic collapse by treating defense spending as a competitive sport.

By end of 2017, Indians will have over 600-700 tanks pointing at Pakistan. Indian generals and their state funded terrorist RSS threatening Pakistan to ten pieces. But West looks the other way but for how long. Pakistan has only one choice left to neutralize their cold start doctrine.

Wrong, not only can India easily afford our current defence spending, we will be spending the equivalent of Pakistan’s GDP annually within the next decade and still spend less than 3 percent of our GDP on defence. And you monkeys can’t do shit about it.