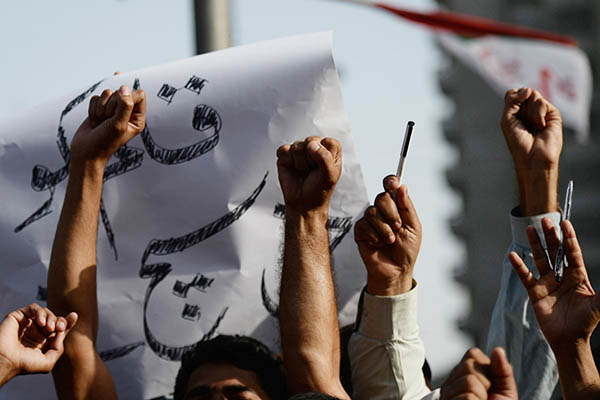 Formal complaint claims media outlet has maligned a state institution and recommends the cancellation of its broadcast license.

Submitted under the PEMRA Ordinance 2002, the complaint claims that Geo News launched a “vicious campaign” of “false accusations” against the ISI, a “state institution tasked to work for the defense, sovereignty and integrity of Pakistan.” According to the complaint, “The telecast in question/campaign was aimed at … falsely linking it [the ISI] with the terrorist outfits/activities.” The statement specifically noted the footage being re-broadcast in India. “Said footage was picked up by foreign media particularly Indian Channels who instead of objectively reporting the incident overplayed it repeatedly,” it said.

“The said reporting has violated the specific terms and conditions of its license,” it said, adding that this was not an isolated incident. “Geo Network has a history of acting illegally in furtherance of the anti-Pakistan agenda,” it said, offering to provide additional evidence if PEMRA required it.

According to the complaint, the editorial team and management of Geo has “clearly” violated PEMRA rules, including casting “aspersions against the Judiciary or the integrity of the Armed Forces of Pakistan” and maligning “any individual in person or certain groups, segments of social, public and moral life of the country,” as per PEMRA rules.

The complaint also points out that print media, especially newspapers published by the Jang Group, published “defamatory, libelous and scandalous material” and reiterates that such “false, malicious and irresponsible” reporting is “continuation of policy” for Geo News.

Citing the evidence provided in its complaint, the Ministry of Defense has demanded that PEMRA “immediately” suspend the license of Geo News and, after investigation, cancel it. In addition, it recommends commencing prosecution of the management of Geo under sections 33 and 36 of PEMRA Ordinance 2002.

Earlier in the day, Interior Minister Chaudhry Nisar Ali Khan had condemned the attack on Hamid Mir, terming it a national tragedy. However, he said the ongoing attacks on national institutions in the press were regrettable. “It is a matter of serious concern that national institutions are being attacked and blamed without any evidence,” he said in a statement. Key national security institutions are not criticized and maligned in this manner anywhere in the world, he added.

The interior minister also condemned the dissemination of the negative propaganda through local organizations. “Our enemies” spread the information across the globe, he said, in an apparent reference to pundits using the Geo reports to slate the ISI.

On April 19, around 5:30 p.m., Geo News anchor Hamid Mir, who hosts the show Capital Talk, was shot six times while traveling to the channel’s bureau in Karachi. Shortly after the attack, the channel claimed—via his colleagues and family members—the injured anchor had alleged that if he were attacked, the ISI and its chief, Lt. Gen. Zaheer ul Islam, should be held responsible. The channel then demanded action against the ISI with columnist Ansar Abbasi demanding that the ISI chief resign to save face.

The military’s Inter-Services Public Relations wing responded by condemning the attack. However, a spokesman said the channel’s accusations were misleading. “Raising allegations against ISI or the head of the ISI without any basis is highly regrettable and misleading,” the spokesman added.

Finally. I wish GEO is completely banned in Pakistan.

Army is over reacting…they should sit together and listen each other and then punish culprits.

Awh” Azhar Shah What kind of settlement army do with geo if today the matter settled then in future every one can blame ISI we all know GEO is screwed Now They Have No Way To Solve The Matter 😀 :p I Repeat GEO is ” Fucked Up ” :p

It is such a shame that a prominent news channel blames our most prestigious organization without any proof.
I really hope that Geo Network is banned in the country for good.

The Government conspires with GEO to humiliate the armed forces and intelligence services of Pakistan, not only should GEO be shut down but action should be taken to end this anti-state media group

There must be a limit for every tv channel specially for GEO network, it seems this network has very much soft corner for India. In Hamid Mir’s issue they emotionaly hit the people of Pakistan who love armed forces.

We are all accusing Musharraf of breaking constitution. But Musharraf never said any word against Pakistan but look at this channel who is not only breaking constitution but also trying to break pakistan by damaging Pak army and ISI image and every time they talks trash about our country. So this ghadar channel and hamid mir jaffar should be banned and hanged.

Geo Network is the voice of anti-Pakistani elements. It is a propanganda machine for the enemies of Pakistan. It should be banned for good all over Pakistan.

Finally this indian channel is going to be banned. Atlast finally .. Every good patriot should be happy . I am very very happy..

So the army is the only one who has the right to blame others ? Just because the armed forces have guns doesn’t mean they can dictate terms to those who disagree with them. Pakistan army must fear the day when Pakistanis themselves rise up against them and consider them the root of all their evils. My advice to Pakistan army: act rationally, don’t over-react.

Geo should be shut down.

Geo News outlet should be closed down.
In United States, Mr Edward Snowden made accusations against US Government, and their intelligence agencies, undermining USA’s national security/interests. What was and is United States response? Ed Snowden is perceived as a traitor in United States.
So what is Hamid Mir and GEO’s crime?
First Hamid Mir has been speaking against intelligence institutions within Pakistan, slandering them, and wrongfully accusing them in the West .Perhaps Mr. Hamid Mir is paid by others to make such bogus statements.
Furthermore, he lied to USA- CIA about terrorists planning a nuclear attack on USA with a dirty bomb and once again wrongfully accusing ISI- when in fact ISI is too busy combating terrorists , separatists who have sponsored by RAW and other agencies.
Next, GEO is more of a propaganda outlet which has nothing important but just entertainment.
I find that there are other media outlets such as ARY, PTV, Express News which are far more professional and ethical in journalism, research and findings.
Next, Mr. Hamid Mir slams the nations Armed Forces. I have never seen Anderson Cooper or any western journalists slam their nation’s Armed Forces. Hamid Mir has no allegiance or loyalty to a country where he benefits from.
So if a channel has a reputation for spreading rumors and propaganda which leads to violence, wars, and problems for a nation- THEN IT SHOULD BE CLOSED DOWN.

I hope GEO shuts down for good( ameen)
, The biggest anti state agent in the country

all the nation with geo … no one can bann it

I have never seen any network so hostile against its own Army and defense institutions. Geo must face stern action as to create an example for rest of the irresponsible elements in the media….

I would first like to cite that Hamid Mir cannot be trusted.

First, he cheated the United States CIA, by claiming that he would help them lead to terrorists, and took money and provided nothing in return. He also made fictious claims about these terror networks having weapons of mass destruction, and would lead to capture in exchange for money. He provided ZERO results or intelligence.

Then Hamid Mir is the same man who was complaining about people smelling and deteriorating city beauty- when they were ONLY protesting for social justice, and security from terrorism and economic prosperity in Islamabad (Long March lead by Dr. Qaderi)

Then Hamid Mir, was also involved in close communication and ties with Taleban and was found to instructing to rough up one of those captured by Taleban.

Then his TV network supported a fake religious guy who was more of entertainer raising money on television.

This is not Anderson Cooper, or some ethical American journalists.

So yes, these types of TV channels that do nothing but mislead and provide nothing better.

Geo News should be banned, ISI and army our true leader

SURPRISED NO BODY TAKE ANY ACTION AGAINST THOSE LOOTED AND LOOTING PEOPLES AND TREASURY OF PAKISTAN?

Geo news must be banned they always bark like a dog how dare geo to alleged the Pakistani armed forces they all are renegade. Pak army is our blood and Pakistan is our soul beware of us.

Shocked at people saying the army is overreacting. How would you act if Geo or any other news channel accused you of attempted murder without any proof? Its not only illegal but extremely irresponsible. In the west newspapers are sued for 100,000s of dollars just for publishing false affairs. Geo has done something much much more serious.