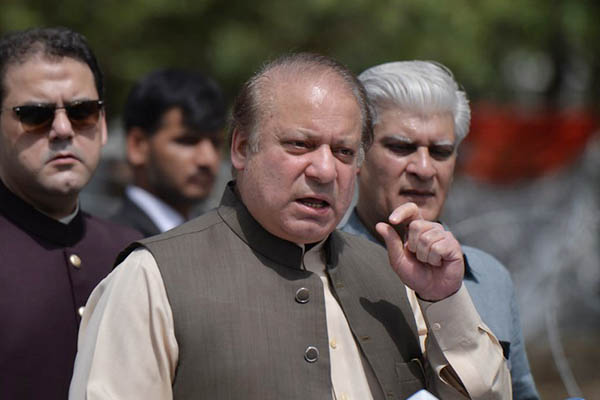 Midterm elections would be disastrous for Pakistan’s political stability

Prime Minister Nawaz Sharif on Thursday appeared before the Joint Investigation Team (JIT) set up by the Supreme Court to probe his family’s alleged corruption. After a three-hour grilling, Sharif addressed the gaggle of press waiting outside—but abstained from revealing how the session proceeded. Instead, he read out a prepared statement declaring that he and his party had been victimized in the past and were suffering once again. He pointed to “unseen forces” that acted from behind the scenes and treated politicians “like puppets.” He said the “final verdict” on whether he was guilty of corruption would come not from the courts, but from the people. Observers have claimed this means snap elections could be in the offing.

Corruption has been an issue in Pakistan since its inception. Politicians of all stripes were ousted from power over various allegations in the past, but many were given a clean chit under then president Pervez Musharraf’s National Reconciliation Ordinance. Similarly, Prime Minister Sharif won the 2013 general elections, but has faced Pakistan’s familiar political instability from Day One over accusations of electoral rigging.

The PMLN-led government was winning that “first round”—with courts finding the 2013 polls to be largely free and fair despite some outliers—when the Panama Papers scandal burst on the scene. None of the 11 million documents detailing nearly 215,000 offshore accounts allegedly concealing money laundering in 80 countries named Sharif personally. However, his family has to account for property bought in London and he could be found guilty by association. In this respect, he is currently facing what may be his final showdown at the JIT, which has itself become controversial after complaints filed at the Supreme Court by persons it has grilled.

Is Prime Minister Sharif thinking of midterm polls? If so, then surveys show his party leading in Punjab and Pakistan-administered Kashmir. Meanwhile, Imran Khan’s Tehreek-e-Insaf trails behind but is developing muscle through “street power.” With the Pakistan Peoples Party having lost ground in Punjab and being now confined to Sindh, the Pakistan Muslim League (Nawaz) will likely return to power—albeit in a much weaker position.

But the election itself will be subject to disturbance, and if there is a change of government, the next five years will unleash more disorder arising from the pulling down of development projects set up since 2013 and radical changes in foreign policy. And there will be much revenge visited on politicians out of power.