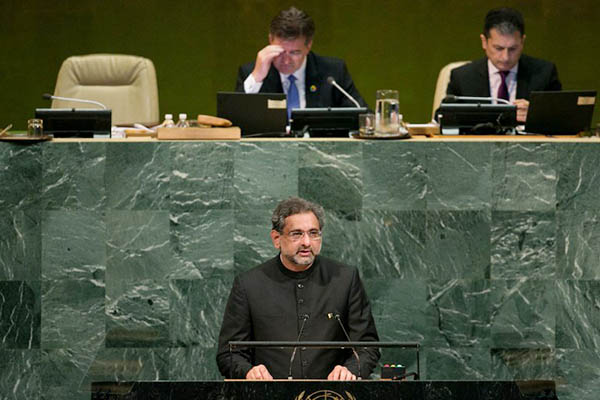 Prime Minister Shahid Khaqan Abbasi has appropriately communicated at the U.N. Pakistan’s defiance of the United States’ policy-pronouncements about “safe havens” and caused some satisfaction to those at home who wanted to deflect international outrage toward India doing horrible things in Kashmir. He expressed his defiance to Vice President Mike Pence, too, by not wearing a necktie, but even then TV discussants found him lacking in oratory skills and thought that his speech could have carried more bite. Pakistani nationalism received a boost and newscasters forgot their usual sangfroid while castigating India and telling America that Pakistan will do its bidding “no more.”

Even if the world wanted to listen to Pakistan it couldn’t afford to because of the bad news coming from here. The recently concluded national census has been deemed seriously flawed and rejected because of the state’s near-absent control of the territories it pretended to command. More international investors are winning arbitrations abroad asking Pakistan to cough up billions it had wasted by challenging agreed projects. The news from Bangladesh was about a growth rate of 6 percent of the GDP for twelve years while many Pakistanis disbelieved the figures trundled out by their own government with its finance minister on the run for money-laundering.

Radicalization was likewise the bad news to scare anyone who even thought that there was some truth in what Prime Minister Abbasi was saying at the United Nations. The declared terrorist organizations were being “mainstreamed” in the face of the ruling party’s objections whose leaders were ridiculed on TV for saying Pakistan too needed to “set its own house in order.”

Radicalization of seats of learning in Pakistan has made the world nervous since Europe and America accept Pakistani students into their institutions. I.S.-backed Ansarul Sharia was born in Karachi University even as its vice-chancellor ignored the police evidence that his institution had turned into a killers’ den. The police also said that Ansarul Sharia who had just staged a killing spree of policemen was manned by science students, one of them a PhD.

The clerical parties are greatly excited at the prospect of “mainstreaming” and have hit the road recommending “action” against Myanmar for killing Rohingya Muslims whose Karachi community of 300,000—in Pakistan since the days of General Zia—is being led by the son of late ISI general, Hamid Gul. More trouble might come from that little detail. Hence, it is clear that Pakistan’s image abroad is not merely a “marketing flaw.” This David at least shouldn’t take on the Goliath of bitter reality.