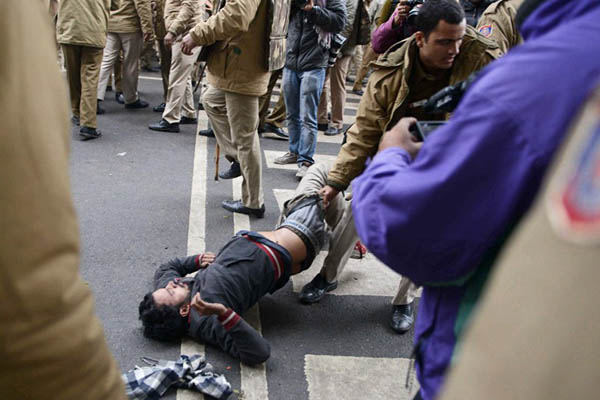 The protest had turned violent before Kejriwal called it off. AFP

Critics claim Aam Aadmi Party’s Arvin Kejriwal has staged a U-turn by backing down before his initial demands were met.

New Delhi Chief Minister Arvind Kejriwal on Tuesday called off a sit-in protest demanding police reforms, which has seen him run the city from a pavement for the last two days.

Kejriwal told a crowd that two policemen he wanted suspended for misconduct would be sent on leave, but he failed to secure his main demand that the city’s police force be put under his government’s control. He said that the lieutenant governor of Delhi, an appointee of the central government, had appealed to him to end his protest, which turned violent on Tuesday.

“After the lieutenant governor’s appeal, we all have decided to end our protest here today,” Kejriwal told a crowd of cheering supporters after dark on Tuesday. “I’m very happy today. Today the people of Delhi have won. I want to congratulate the people of Delhi,” he added.

Kejriwal, an anti-corruption campaigner who swept to power last month, declared himself an “anarchist” on Monday and called a mass demonstration to disrupt Republic Day celebrations at the weekend. Overnight, the 44-year-old slept outside on a pavement under a thick blanket, awakening to rains and strong winds.

His central demand was that the Delhi police, widely viewed as corrupt and inefficient, should be transferred to his state government’s control from the national home ministry. As with other demands in the past by different chief ministers, the central government refused to agree because of Delhi’s status as the national capital.

Kejriwal says the police, the focus of public fury after the fatal gang rape of a student in December 2012, have failed to prevent crimes against women. “We are committed to ensuring the security for women in Delhi. If any woman in Delhi is attacked, we will not sit quiet, we will raise our voice,” he said Tuesday night.

Critics immediately branded his move a U-turn, as Kejriwal had originally demanded the suspension of some five officials in total over recent crimes, according to the Press Trust of India. “A climb down for CM (chief minister) of Delhi!” Kiran Bedi, a former high-ranking police officer and previously an anti-graft colleague of Kejriwal, tweeted. Arun Jaitley, a senior leader of the opposition Bharatiya Janata Party, called it a “theatre of absurd.”

Clashes broke out Tuesday between riot police armed with batons and dozens of supporters of Kejriwal when they were prevented from joining his sit-in protest. Aides brought him files for the administration of the city of 17 million people as he sat with other members of the cabinet at the protest site, near the high-security area that houses the parliament and the presidency building. He had warned earlier Tuesday that he would escalate the demonstration and was prepared to sit indefinitely.

Thanks to barricaded roads leading to the protest that caused traffic chaos and forced the closure of nearby subway stations, #AAPdrama and “Arvind Kejriwal” turned into top trending Twitter topics in India.

Kejriwal was sworn in as chief minister of the city of 17 million last month after his new Aam Aadmi (Common Man) Party made sensational gains in state elections against India’s two biggest parties. He plans to shake up national elections due before May by once again taking on the ruling Congress and the opposition BJP. But after enjoying overwhelmingly positive media coverage and support from the poor and middle-class, there are signs his latest campaign has backfired and the honeymoon is over.

Kejriwal, a former tax official, rejected criticism that he was failing to govern responsibly, and was instead relying on grassroots tactics. “Some people say I’m not working, that the Delhi government is not working. We are here to support women’s safety which is an important issue,” he said during the day.