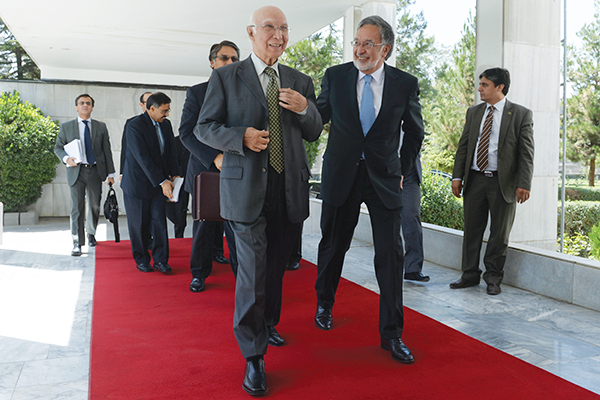 A charm offensive designed to ease tensions between Pakistan and Afghanistan appeared to gain little ground last week after President Hamid Karzai responded to an invitation to visit Islamabad with a list of demands. According to Karzai’s office, a high-ranking delegation would only visit Islamabad if the trip were agenda-based with an emphasis on preventing terror attacks and encouraging the peace process. While the demands appear reasonable, the implied allegation that Pakistan’s government has been working against the Afghan government has angered many, especially as the invite was personally delivered by Sartaj Aziz, Pakistan’s de facto foreign minister. During a press conference in Kabul, Aziz denied the perception that Pakistan controlled the Taliban, although he admitted that the state has “some ties” with the organization. In recent months, ties between Kabul and Islamabad have deteriorated over cross-border shelling and Karzai’s anger over the opening of the Taliban office in Doha. Karim Khorram, Karzai’s chief of staff, has even claimed the Taliban office was part of a plot from either Pakistan or the U.S. to break Afghanistan.