Home Culture Dentist Who Killed Cecil the Lion Has Also Poached in the U.S.

Dentist Who Killed Cecil the Lion Has Also Poached in the U.S. 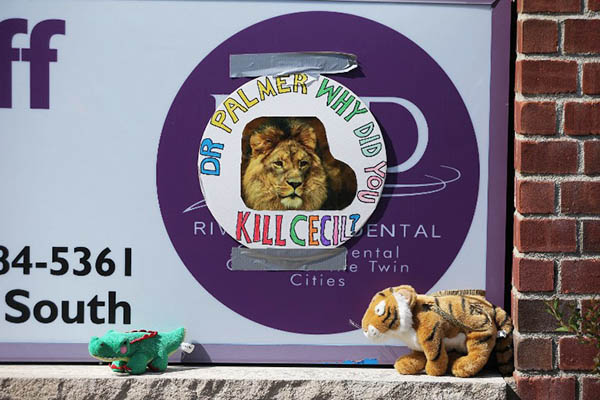 Walter Palmer has killed 43 different animals, including a polar bear and an elephant.

The wealthy American dentist who killed Zimbabwe’s beloved lion Cecil is a trophy-seeking bow hunter with a poaching conviction in the United States.

Walter Palmer, 55, boasted that he is a bow-hunting purist who doesn’t carry a gun as backup when pursuing big game. A figure of some renown in hunting circles, he made the claim in a New York Times article on trophy hunting published in 2009.

He told the paper he learned to shoot at age five and said at the time he had slain all but one of the 29 trophy animals recognized by the bow hunting group Pope and Young. His kill list of 43 different animals also includes a polar bear, mountain lion, an elephant and an African lion he killed in 2005, according to club records obtained by the Minneapolis Star Tribune.

Images of Palmer grinning over his dead prey—a limp leopard held up like a plush toy in his shirtless arms, a rhino, an elk, a big horned sheep, a cape buffalo—circulated widely on the Internet and fed a firestorm of criticism.

“The big question is, why are you shooting a lion in the first place?” comedian Jimmy Kimmel said in his late night television show’s opening monologue. “How is that fun? Is it that difficult for you to get an erection that you need to kill things? They have a pill for that… It will save you a lifetime of being the most hated man in America.”

Palmer illegally shot a black bear outside a designated hunting zone in the U.S. state of Wisconsin in 2006, court records showed. He pleaded guilty to lying to federal authorities about the location of the kill in 2008, paid a nearly $3,000 fine and was required to forfeit the bear’s remains.

Cecil, a popular attraction among many international visitors to the Hwange National Park, was reportedly lured outside the park’s boundaries by bait and initially shot with a bow and arrow. But the arrow is said to only have wounded him and a conservation charity said it took 40 hours before Palmer and his guide tracked Cecil down and shot him dead with a gun.

Within hours of the news breaking Tuesday, Palmer’s social media feeds were flooded with blistering attacks—and threats. The Facebook account of his dental practice, River Bluff Dental in a suburb of Minneapolis, Minnesota, was shut down and its website kept crashing.

His Twitter account appeared to have been hacked as it was filled with images from the Lion King movies and missives like “You people seriously need to chill out. It was just a lion. Our practice is our livelihood.”

By Wednesday afternoon, a petition demanding justice for Cecil had garnered more than 517,000 signatures and there were more than 6,200 messages about his practice on review site Yelp. A makeshift memorial had also formed outside Palmer’s shuttered office after people dropped off stuffed toys and flowers, and a local artist painted a mural of Cecil on a wall in the parking lot.

Palmer expressed regret at killing Cecil on Tuesday, insisting that he had “relied on the expertise of my local professional guides to ensure a legal hunt.”

“I had no idea that the lion I took was a known, local favorite, was collared and part of a study until the end of the hunt,” Palmer said in a statement. “I deeply regret that my pursuit of an activity I love and practice responsibly and legally resulted in the taking of this lion.”

However, critics were unmoved by his apology. Many attacked him for engaging in the controversial sport to begin with. Others questioned his sincerity given his past poaching conviction.

Longtime friend and hunting companion Dennis Dunn defended Palmer as an ethical hunter with an “exceedingly accurate shot” who would have pursued the wounded lion in order to put it out of its misery. A profile on his dentistry practice’s website said the married father of two is originally from North Dakota and “enjoys all outdoor activities.”

“Anything allowing him to stay active and observe and photograph wildlife is where you will find Dr. Palmer when he is not in the office,” it continued, without mentioning his hunting exploits.