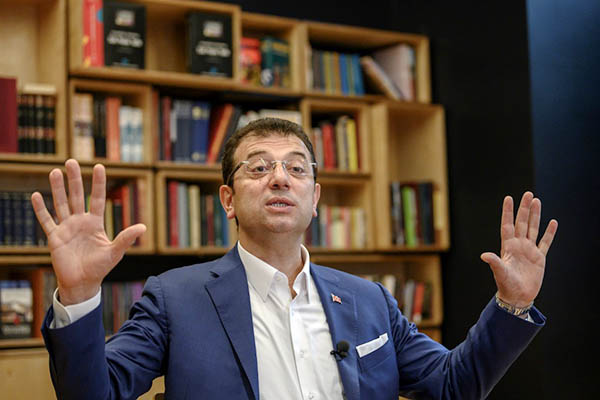 Istanbul’s deposed mayor Ekrem Imamoglu, who was stripped of his election win this week, told AFP he would lead a “revolution” for democracy ahead of next month’s re-run of the vote.

A softly spoken opposition figure who struck a unifying tone during the campaign, Imamoglu’s win shocked the ruling party which had controlled Turkey’s largest city for years. “What we are doing now is a fight for democracy and mobilization for democracy. It will of course be a revolution once we carry it to its conclusion,” he told AFP at his office on the outskirts of Istanbul.

Turkey’s top election body annulled the results of the March 31 mayoral vote on Monday, after the ruling party of President Recep Tayyip Erdogan alleged “serious corruption” in the count. European Parliament politicians said the decision would end the credibility of democratic elections in Turkey.

“The seven members [of the election body] will take their place in history like a black stain, but it is our responsibility to correct it. We keep on fighting,” said Imamoglu, who represents the main opposition Republican People’s Party (CHP). “I wish they had done their job. They failed to do so,” he added.

The loss of Turkey’s economic hub was a major setback for Erdogan and his party, which has relied on the city’s financial resources to maintain networks of patronage. It was the first time the opposition had taken control of Istanbul in 25 years and was particularly sensitive for Erdogan, himself a former mayor of the 15-million strong metropolis.

Asked how his party would avoid any irregularities when the election is re-run on June 23, Imamoglu said: “We will be very cautious. We will fight hard. You will see hundreds of thousands get involved in the process. They will do their duty at the ballot box,” he told AFP. “Thousands, tens of thousands of lawyers not only from Istanbul but from all over Turkey will help run the process with the ultimate goal of zero mistakes.”

There has been an outpouring of support for Imamoglu on social media, including from businesses and artists under the slogan “Everything will be fine.”

“This is a proof of Turkey’s faith in democracy. This nation is fond of their freedom,” Imamoglu said of the media campaign.

On the campaign trail, the 49-year-old was often seen mixing with voters in the bazaar and cafés, and taking selfies with them. That contrasted with the giant rallies called by Erdogan, who filled the airwaves in almost daily-televised speeches, even though he himself was not running.

Imamoglu said he would not change his campaign style. “I will be in bazaars and on the streets,” he said.

Born in 1970 in the Black Sea coastal city of Trabzon in northern Turkey, Imamoglu studied business administration and worked in the family construction business before entering local politics a decade ago. He was elected district mayor of Istanbul’s Beylikduzu area in 2014.

The annulment of the election result drew wrath even from some of Erdogan’s former allies in the ruling party.

Ex-prime minister Ahmet Davutoglu wrote on Twitter on Tuesday: “The biggest loss for political movements is not losing elections but the loss of moral superiority and social conscience.”

Turkey’s Western allies have also voiced concern, with Germany saying the election board’s decision was “incomprehensible.” Asked if he thought his campaign now had the momentum to take him all the way to the presidency, Imamoglu said “time will tell.”

“Our goal right now is the Istanbul mayor’s office. We want to run Istanbul,” he said. “We want to take back what we have already won.”