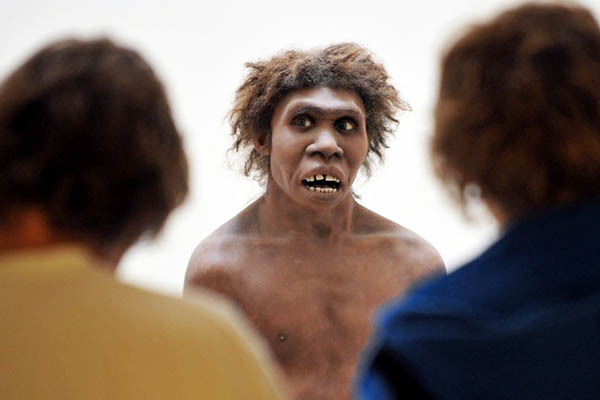 If you can’t seem to quit smoking, or have a tendency to become depressed, you might be able to blame your Neanderthal heritage.

After a massive study linking tens of thousands of modern people’s medical records to their genetic histories, certain genes inherited from Neanderthals have been linked to psychiatric disorders, blood clotting and addictive behaviors, researchers said Friday.

The legacy of human ancestors from Africa interbreeding with Neanderthals in Europe has left today’s people—at least those who come from Europe or Asia—with anywhere from one to four percent of their genes traceable to Neanderthals, scientists announced in 2010. This study, in the Feb. 12 edition of the journal Science, is the first to compare Neanderthal DNA in the genomes of a large population of adults of European ancestry—some 28,000 people—and their health records to show a “subtle but significant impact on modern human biology,” said the article by John Capra, an evolutionary geneticist and assistant professor of biological sciences at Vanderbilt University. “Our main finding is that Neanderthal DNA does influence clinical traits in modern humans,” he said.

“We discovered associations between Neanderthal DNA and a wide range of traits, including immunological, dermatological, neurological, psychiatric and reproductive diseases.” The study found that modern human DNA contains 135,000 gene variants that come from Neanderthals, who disappeared around 30,000 years ago. They also found that these variants were linked to a higher risk of 12 illnesses, including depression and heart attack.

Specifically, Neanderthal genes were linked to a significantly higher risk of nicotine addiction. Many bits of Neanderthal DNA were associated with psychiatric and neurological effects. Some gene variants from Neanderthals raised the risk of depression, while others lowered the risk.

“The brain is incredibly complex, so it’s reasonable to expect that introducing changes from a different evolutionary path might have negative consequences,” said co-author Corinne Simonti, a doctoral student at Vanderbilt.

Other effects were seen in the blood. Some Neanderthal variants led to increased blood coagulation, which would be helpful in healing more quickly from wounds and preventing pathogens from entering the body. But today, people with thicker blood have a higher risk of stroke, pulmonary embolism and pregnancy complications.

Neanderthals lived in Europe and western Asia for some 200,000 years before the arrival of modern humans. Researchers believe that the modern population, as it evolved, retained some Neanderthal DNA because it was helpful for coping in new environments outside Africa. However, many of these traits may no longer be advantageous in modern environments.

A previous study, published in January in the American Journal of Human Genetics, found evidence that Neanderthal genes were linked to certain immune disorders, allergies and asthma.