Home Latest News ‘Despite Being a Woman’ Lands Modi in Trouble

‘Despite Being a Woman’ Lands Modi in Trouble 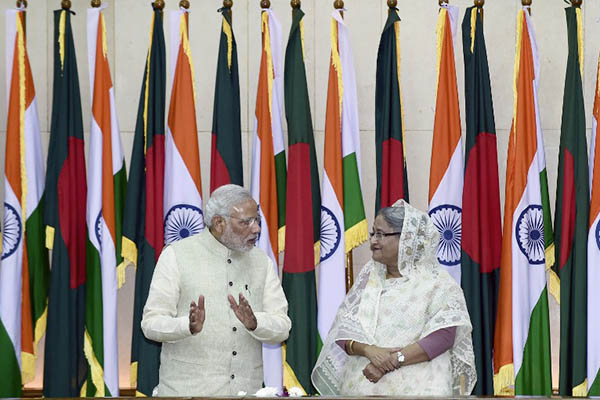 Indian Prime Minister Narendra Modi came under a barrage of criticism on social media Monday after he praised his Bangladeshi counterpart for having the courage to fight terrorism “despite being a woman.”

Modi complimented Sheikh Hasina during a two-day visit to Bangladesh at the weekend, saying in Hindi it was “heartening that the prime minister of Bangladesh, despite being a woman, is openly saying that she has zero tolerance for terrorism.” The comment sparked a flurry of sarcastic comments, jokes and pictures of successful Indian women on social media. The #DespiteBeingAWoman hashtag was India’s top trending topic on Monday.

While scores poked fun at the Indian premier’s gaffe, others expressed anger, questioning whether Modi meant women were generally tolerant of terrorism.

Indian politicians, including some from Modi’s Bharatiya Janata Party, have come under fire in the past for sexist language. But since storming to power in May last year, Modi has sought to position himself as a champion of women’s rights, emphasizing the importance of toilets for poor and vulnerable women, education for girls and the ending of female feticide in India. In his first Independence Day speech last August, he addressed the issue of rising sexual assaults on women and called on parents to raise their sons better.