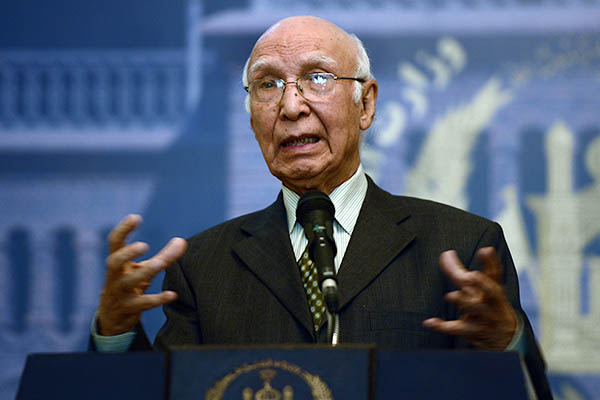 Pakistan is still keen to pursue dialogue with the Taliban, the government’s top national security adviser said Thursday, despite a spate of bloody attacks in the country’s northwest.

Three bombings in the space of a week in Peshawar killed over 140 people, most of them civilians, prompting many to question a government plan to seek peace with the militants.

The umbrella Tehreek-e-Taliban Pakistan (TTP) group has denied responsibility for the attacks, which included a double suicide bombing on a church, and claimed a conspiracy to thwart the talks was afoot.

Sartaj Aziz, adviser on national security and foreign affairs to Prime Minister Nawaz Sharif, said talks should be given a chance.

“Despite these incidents the dialogue option should be pursued, because the Taliban are many groups and many of them have said they do want to pursue dialogue,” he told reporters. “There are some elements who want to disrupt the dialogue but the whole purpose of the dialogue is to put an end to such incidents.”

The TTP, which has waged a bloody insurgency against the Pakistani state since 2007, has issued stringent conditions for its participation in talks, including the release of its cadres from jail and the withdrawal of troops from the tribal areas along the Afghan border. Aziz’s remarks came a day after the TTP said it would only consider a government ceasefire to be valid if it included an end to U.S. drone strikes in the tribal areas, where it has strongholds.