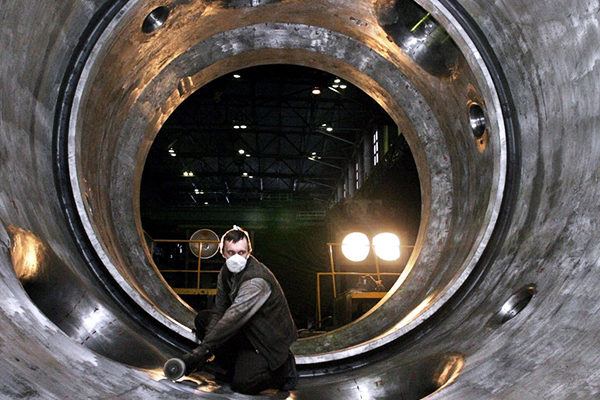 One of the two 1,000-megawatt nuclear reactors for Kudankulam built in St. Petersburg, 2004. Sergey Kulikov—AFP

India’s Supreme Court gave the green light on Monday to the commissioning of the nation’s largest nuclear power plant in the southern state of Tamil Nadu, despite widespread protests.

“The plant has been set up for people’s welfare,” said the ruling on the Kudankulam plant. “Necessary clearances have been taken by the government, and development of the nuclear power plant is important for India,” it added. “We have to strike a balance between the larger interest and economic necessities,” judges K. S. Panicker Radhakrishnan and Dipak Mishra said in the ruling. At the same time, the court ordered the government to submit a final report on the plant’s safety and waste-disposal arrangements to deal with hazardous material.

The Russian-built Kudankulam plant is the country’s biggest nuclear power project and is designed to help meet a surging demand for electricity in Asia’s third-largest economy where power blackouts are frequent. Plans for the facility were first drawn up in 1988, and two of the reactors are now in place. The plant was supposed to open in 2011, but large, often violent protests, by locals worried about radiation delayed the startup. Several petitions had been filed before the top court by antinuclear activists challenging the project on safety grounds.

Opponents of the plant say it is located in a seismically-sensitive area and fear that a Fukushima-style disaster could kill thousands of people in the coastal region. Fishermen, who form the majority of the population in the plant’s vicinity, are also worried the plant will affect marine life. “There are still several problems with the reactors that are in place. The court needs to ensure those issues are dealt with before giving a go-ahead,” said Karuna Raina, a Greenpeace campaigner. “Even if a small thing goes wrong, it can affect a huge number of people.”

The nuclear plant has also been a growing source of tension between state and national authorities, but Prime Minister Manmohan Singh has stood by the project and his government’s wider nuclear power development plans.

The plant is one of many India hopes to build as part of its aim of generating 63,000 megawatts of nuclear power by 2030—part of a planned 15-fold rise from current levels, according to the Nuclear Power Corp. of India. Nuclear energy has been a priority for India since 2008, when then-U.S. president George W. Bush signed into law a deal with New Delhi that ended a decades-old ban on U.S. civilian nuclear trade with the country.