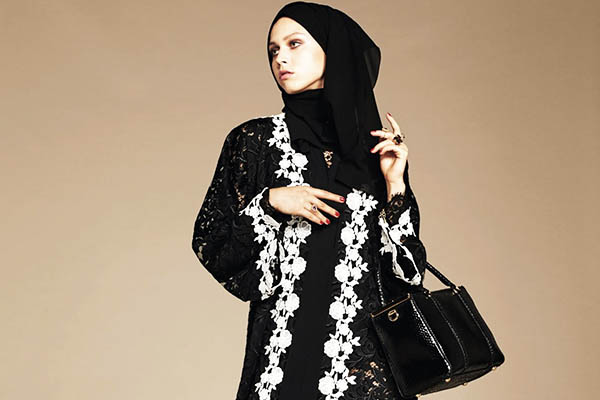 Dolce and Gabbana, designers best known for womenswear inspired by the sultry sensuality of southern Italy, are attacking the booming middle Eastern market for high fashion with a collection of abayas and hijabs.

The Abaya line, which conforms with the modesty requirements of most versions of Islam, was launched this week in D&G’s boutiques throughout the Middle East, as well as in Milan, Munich, Paris and London, popular destinations for well-heeled shopping tourists from the region.

The mini collection, billed as capturing the “allure of the Middle East,” has generated a stir of interest on social media with designers Stefano Gabbana and Domenico Dolce generally winning praise for demonstrating that dressing modestly does not have to mean dressing drab.

A spokeswoman for the designers said there was no particular agenda other than catering for their customers’ requirements. “It is not the first capsule collection Dolce and Gabbana has designed and dedicated to a specific market,” she told AFP. “In the past, they have created collections for the China market, as well as Brazil, Japan and Mexico. So it’s a collection without any ideological or polemic attitude.”

The company describes the pieces as “a reverie amidst the desert dunes and skies of the Middle East: an enchanting visual story about the grace and beauty of the marvelous women of Arabia.”

Fabrics include Georgette, a type of sheer crepe, and charmeuse, another lightweight material, with much use made of lace for trim and inserts. Oversized jewelry and sunglasses also give the collection D&G’s distinctive signature.

According to a report by management consultancy Bain, sales of personal luxury goods in the Middle East totaled $8.7 billion in 2015, up nearly 28 percent from 2014.

Other top fashion brands have already attempted to boost their sales in the region with collections tailor-made for the market, notably Oscar de la Renta, DKNY and Tommy Hilfiger.

Idrissi said D&G’s entry to this particular market was “definitely a positive thing.”

“I think [fashion houses] are realizing; let’s not just do it in that one month, let’s make this something to stay, because they’ve realized the potential and how much Muslim women spend on fashion,” she told Britain’s Daily Telegraph.