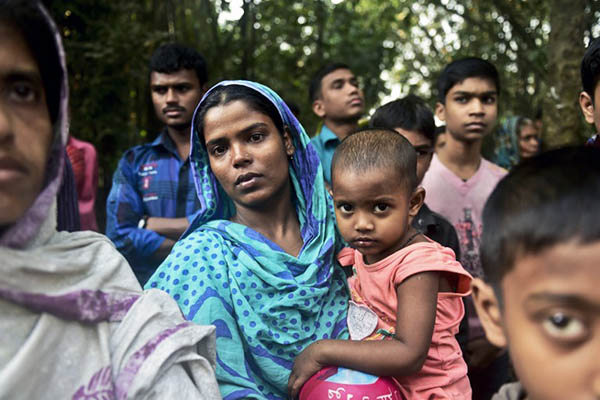 The horrific slaughter of diners at a Dhaka café has fanned fears that surging Islamist violence may imperil the giant garment industry in Bangladesh, which built its economy on cheaply supplying fashion to the world’s big-name brands.

Gunmen stormed the Holey Artisan Bakery in the capital’s diplomatic quarter on Friday evening, rounding up foreign hostages before murdering 20 people with explosives and machetes, in a brutal targeting of the small expat community.

Islamic State jihadists released gruesome images of corpses lying in crimson pools on the café floor as they claimed responsibility for the deadly 11-hour siege. Most of the victims were Italian or Japanese.

“This attack will turn away foreigners,” said Faruque Hassan, senior vice-president of the Bangladesh Garment Manufacturers and Exporters Association, which represents 4,500 factories. “The impact of this attack will be very damaging for the industry. We are now extremely worried,” added Hassan, whose Giant Group supplies clothes to retailers including Britain’s Marks Spencer and Next.

Even before the café siege, Bangladesh, the world’s second-biggest exporter of apparel after China, was reeling from a wave of Islamist-linked killings of religious minorities, liberal activists and foreigners, including an Italian aid worker last September. Concern is mounting that the South Asian nation, wracked by political instability since independence in 1971, is sliding into deeper chaos, with under-pressure police arresting 11,000 people last month in a desperate crackdown.

“The hostage crisis in Dhaka is a terrible tragedy reflecting how security has deteriorated in the country,” said Sarah Labowitz, co-director at the NYU Stern Center for Business and Human Rights in New York. The violence presents “a serious threat to the economy,” Labowitz said. “This kind of attack will surely keep [fashion] buyers away in the months leading up to the holiday shopping season.”

Although a quarter of its 160 million people still live below the poverty line, Bangladesh has clocked growth of around six percent nearly every year since the turn of the millennium. That’s largely thanks to garment exports, the lifeblood of its economy, accounting for more than 80 percent of total outbound goods last year.

Between them the nation’s clothing factories employ more than four million people, most of them impoverished rural women.

Ulrica Bogh Lind, a spokeswoman for H&M, which sources many of its clothes from Bangladesh, told AFP the Swedish chain was “deeply sad about the tragic incident.”

“We are of course monitoring the situation in Dhaka closely.”

Trade-dependent Bangladesh may suffer the same fate as its restive rival Pakistan, fears Ahsan Mansur, a former representative for the International Monetary Fund in Islamabad. “I saw the decline of a promising economy into a terrorist hotspot. This attack reminds me of those days, although I hope things won’t turn out that way,” said Mansur, now executive director of the Policy Research Institute in Dhaka.

When extremist violence began to spread in Pakistan, he said, the first sign of financial malaise was expat families packing their bags, then trade and investment crumbled. “The perception that Bangladesh is a potential terrorist hotspot can seriously hit our export potential and growth prospects.”

The deadly Rana Plaza factory collapse that killed at least 1,138 workers in 2013 shocked the world, heaping opprobrium on Western retailers seen as exploiting impoverished workers. But the tragedy prompted retailers to act on appalling safety conditions in their factories, where fires and other accidents are frequent.

Brands set up two global alliances to make workshops safer and cleaner—although it remains a work in progress.

While retailers will watch Bangladesh closely, industry experts point out that unrest plagues many developing countries where labor is cheap. As Islamist attacks in France, Brussels and the United States over the past year show, the threat of extremist violence is not confined to single countries.

“If foreigners give in to fear, terrorism’s political mission will have succeeded,” said Devangshu Dutta, chief executive of Third Eyesight, a retail consultancy in New Delhi. “Exports and foreign investment are both critical [in] the uplift of a very large poverty-stricken population,” Dutta told AFP. “The contribution of foreigners is vital. It is important for everyone to remain engaged.”