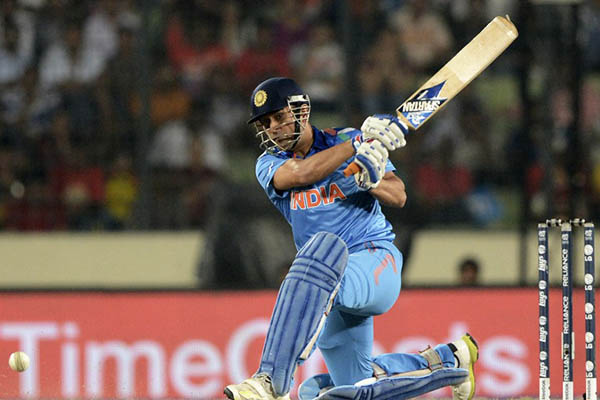 Indian skipper will still lead his team in next year’s World Cup tournament.

Mahendra Singh Dhoni, the proud owner of a fleet of motorbikes, has lived life in the fast lane ever since he quit his job as a railways ticket inspector to realize his dream of playing for India. But on Tuesday, the Indian skipper began putting the brakes on a career that has brought him a string of podium finishes as he quit Test cricket after yet another series defeat away from home.

While Dhoni will still lead India in its defense of the 50-over World Cup that starts next month, he acknowledged in a statement that “the strain of playing all formats” of the game had taken its toll.

The timing of the announcement, with one Test still to go in the series against Australia, might have been something of a shock. But few people in the game were surprised that the burden of captaining such a cricket-mad country had taken its toll on the wicket-keeping batsman, whose silver-streaked sideburns belie his 33 years.

“The amount of cricket he was playing probably told on him,” said the former batting great Sunil Gavaskar, who nevertheless said India “will miss Dhoni big-time.”

Dhoni’s love of his country is well known, once describing his appointment as an honorary lieutenant colonel in the parachute regiment as the proudest day of his life. “I tell my wife she is only the third most important thing after my country and my parents, in that order,” Dhoni said in a recent interview, in which he also spoke of how he would know when his time had come. “I’ll know it is time to finish when I am no longer one of the fastest movers in the team. At that point I will surely know age is winning,” he told All Out Cricket magazine.

Dhoni’s will to win was never in doubt from the moment he burst onto the scene, soon after quitting his job on India’s railways. In one of his first international appearances in April 2005, he smashed 148 off 123 balls against Pakistan in Visakhapatnam.

He made his Test debut later that year in Chennai, the first of 90 Tests in which he scored 4,876 runs at an average of just over 38. His 27 victories in charge of the Test team is a record for an Indian captain. His swashbuckling style and leadership qualities soon earned him the captaincy of India’s T20 team after senior players like Rahul Dravid and Sachin Tendulkar opted out of the first ever T20 World Cup in 2007.

When his men clinched the trophy with a thrilling win over Pakistan in the final in Johannesburg, Dhoni acquired instant hero status. Dhoni replaced Anil Kumble as full-time Test captain in November 2008 and a year later India rose to the number one ranking in Tests, a position they held for two years.

The crowning glory came on April 2, 2011 when India won the World Cup for only the second time, with Dhoni smashing the winning six against Sri Lanka at the Wankhede stadium in Mumbai. But the joy was short-lived. A few months later India began a long nightmarish struggle in Tests in overseas conditions.

The poor record included two 4-0 whitewashes in England and Australia in 2011-2012 and a 3-1 loss in England earlier this year, besides series losses in New Zealand and South Africa. But while his acumen as a Test skipper may have been called into doubt, he is still widely regarded as one of the astute captains ever in short-form cricket.

As well as captaining India, he has also been the skipper of the Chennai Super Kings in the Indian Premier League (IPL) competition. The team was established by N. Srinivasan, the controversial president of the International Cricket Council. Dhoni is vice-chairman of Srinivasan’s cement company.

One of the highest earners in world sport, Dhoni was recently rated by Forbes as India’s richest sportsman with an annual brand value of $20 million. It has enabled him to indulge his love of motorbikes and build a collection which includes high-powered Harley Davisons and Ducatis.

While he may get to spend more time with his bikes in the future, he still has the small business of defending the World Cup which begins in Australia and New Zealand on Feb. 14. “Well done on a wonderful career in Test cricket,” his former teammate and batting superstar Sachin Tendulkar tweeted on Tuesday. “Next target 2015 WC my friend!!”