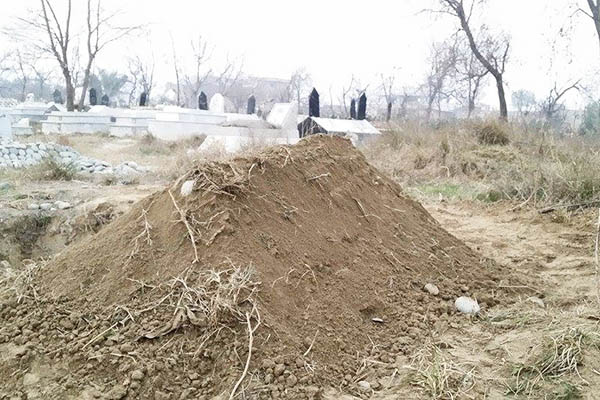 The unmarked grave of the Charsadda attackers.

In a forgotten corner of one of Peshawar’s largest cemeteries lie unmarked graves that are the final resting place of people who have perpetrated some of the worst atrocities on Pakistanis in the country’s ongoing war on terror.

“We don’t get much advance notice about the burial of militants,” says an undertaker. “Security forces personnel often tell us to prepare graves and then hand over bags which may contain either body parts [of suicide bombers] or whole bodies,” he says. One such instance was in April 2010, when five attackers targeted the U.S. consulate in Peshawar, killing six people and injuring 20 others.

“[In that case] security forces told us to dig two graves and wait for the bodies. Later in the evening, a few of them brought me two small coffins for burial,” he says, adding he had been surprised by how light the coffins had felt. “I later learnt that the coffins were light because they had only been able to recover some body parts,” he adds, noting it is already hard to find the graves a mere six years later because they have no distinguishing marks and have fallen into disrepair due to lack of attention.

The militants who targeted Charsadda’s Bacha Khan University on Jan. 21 met an equally ignoble fate. After the military had defeated the four attackers and declared an ‘all clear’, police gathered their bodies in hostel room that had been targeted by the militants. A National Database and Registration Authority team then collected fingerprints and other biometric data to identify the assailants. Once the examinations were complete, an unlucky cop was tasked with dragging the bodies out one by one, placing them on a charpoy, and dumping them in a police van for transport to their final resting place—an unmarked grave in a local cemetery.

“It’s not within my power, but I would have preferred to hang these bodies in a public square [for all to see],” said the official, who spoke on condition of anonymity, after he deposited the last extremist’s body in the van. A group of angry protesters, witnessing the bodies piling up, echoed his sentiments.

“Hang their bodies so everyone can see how the life of a terrorist ends,” they said. Reiterating the popular refrain of “terrorists are not Muslims”, the demonstrators demanded the militants be denied any kind of proper burial—as required by Islamic tradition. 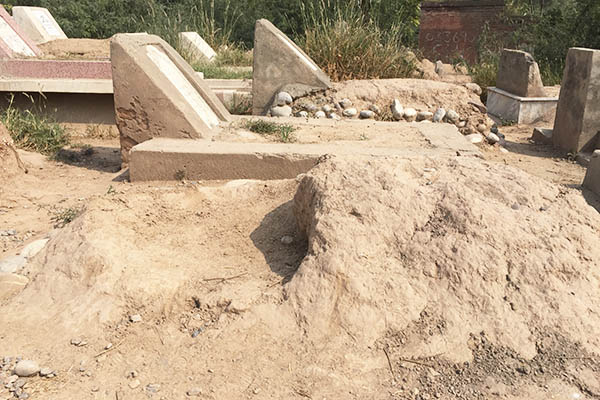 The remains of one of two unmarked militant graves in a Peshawar cemetery.

The proper removal of militant bodies is an especially touchy subject in Pakistan, as there is a threat of supporters turning graves into shrines—as was feared by the U.S. following its assassination of Osama bin Laden. To overcome that hurdle, Washington allegedly buried the Al Qaeda leader’s remains at sea. This is not practicable in Pakistan, which is mostly landlocked. Anonymous gravesites mitigate this, with police saying most people are unlikely to be aware that the graves belong to mass murderers.

“We bury terrorists in unidentified locations for two reasons: Normally, the relatives of terrorists aren’t interested in taking their bodies because of the impact on their social standing, and secondly we fear the militants may try to exhume the bodies and use them in a bid to glorify extremism,” says an official of Peshawar’s forensics lab on condition of anonymity. In the past, militant leaders would try to create myths about their dead by claiming the bodies smelled fragrant instead of the usual stench associated with decay, he added.

Contrary to popular opinion, says the official, most extremists they bury tend to be locals. “We always try to gather data from the bodies of deceased terrorists before burying them,” he says. “We examine chemical residue to ascertain what kind of explosives were used. We also take DNA samples and send them to Lahore [where the Punjab Forensic Science Agency is based] for further investigation,” he says, adding that most of the attackers are Pakistanis. “There have been a few cases, such as the 2012 Peshawar airport attack, in which Uzbeks were involved, and there have been some cases of Arabs launching attacks,” he says. “But most attacks are perpetrated by locals.”

A senior police official echoes these findings, saying a majority of terrorists are from Pakistan. Not that the militants’ local heritage is of any concern to those who are tasked with burying their remains.

“I don’t think I have ever seen anyone offer prayers for the militants buried here,” says the Peshawar undertaker. “Their graves will always be anonymous.”