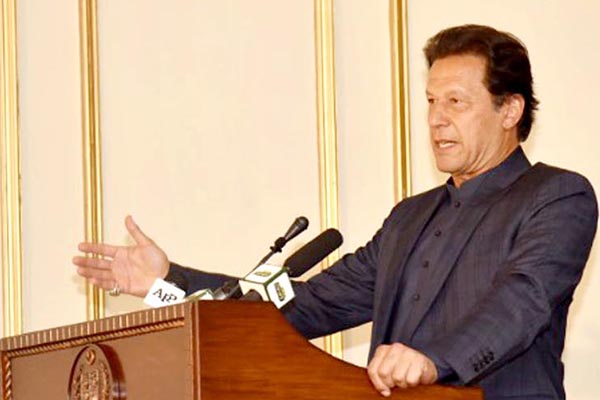 Digitizing the government’s core functions will help prevent corruption by bringing in transparency, and accelerating ease-of-access and facilitation of the public, Prime Minister Imran Khan said on Thursday.

Addressing the launch of his government’s Digital Pakistan Initiative, Khan said it had always been an aim of his to introduce e-governance to the country. “However, our primary focus in our first year was on stabilizing the national economy,” he said, adding that now that the economy was on strong footing, e-governance would take priority.

Under the Digital Pakistan Initiative, the government has outlined the country’s digital ambitions, with a desire to establish a digitally progressive and inclusive Pakistan that eases cooperation between the state and the private sector. The program also envisages providing basic services through mobile handsets, thereby saving people from having to queue up at banks or government offices to get simple tasks accomplished. It is divided into five core pillars: access and connectivity; digital infrastructure; e-government; digital skilling and literacy; innovation and entrepreneurship.

Under the head of ‘Access and Connectivity,’ every Pakistani would have access to the internet as a fundamental right. The second pillar of ‘Digital Infrastructure’ aims at allowing daily tasks to be completed via smartphones quickly and securely. The third goal is E-Government, aiming at digitizing intra-government operations and processes to move toward paperless operations, ensuring better delivery for citizens. The fourth pillar ‘Digital Skills and Literacy’ will help tech graduates secure relevant jobs. The final pillar, ‘Innovation and Entrepreneurship,’ will provide an enabling environment for start-ups.

The prime minister said digitization would prove particularly beneficial for the youth of Pakistan, as it would create new jobs and make it easier for entrepreneurs to set up businesses with minimal difficulties. “The youth of Pakistan can become the country’s greatest strength if given the opportunity,” he said, adding that this would also open up greater employment opportunities for women.

Khan said that digitizing the operations of Shaukat Khanum Hospital approximately 19 years ago had brought about transparency, and reduced pilferage. He claimed some institutions were resisting the digitization initiative, but vowed to complete this goal without delay. He said the government also wanted to promote e-commerce by addressing the cyber-security challenges.

Siddiqui told the gathering Pakistan was at a crossroads and needed to either adopt the benefits of digitization or risk losing them. He said the government must review the curriculum of IT, as only 5,000-6,000 of around 25,000 annual graduates secured employment, highlighting the gap between the education standards of the country and market needs.

The minister said Pakistan must focus on building the country’s digital infrastructure in order to keep pace with global advancements in artificial intelligence and 6G technology. He also advised the youth to utilize social media tools like Facebook and YouTube for educational purposes in addition to socializing.

State Bank Governor Raza Baqir told the audience digital payments were a component of the digitization initiative that was most relevant to the central bank’s operations. He said digitization would facilitate entrepreneurs in launching companies, while it would help the common man make transactions through their mobile phones. Digitization would also promote microfinance, which could support the small business sector by lending money at far lower rates than the informal sector.

Later, addressing the media, Special Assistant to the Prime Minister on Information and Broadcasting Firdous Ashiq Awan said a digital Pakistan reflects the prime minister’s vision of increasing connectivity of the people and would further cement relations between government and the people.

She said the program laid the foundation for a strong, prosperous and forward-looking Pakistan. E-purchases would ensure transparency in public procurements and purchases, she added.