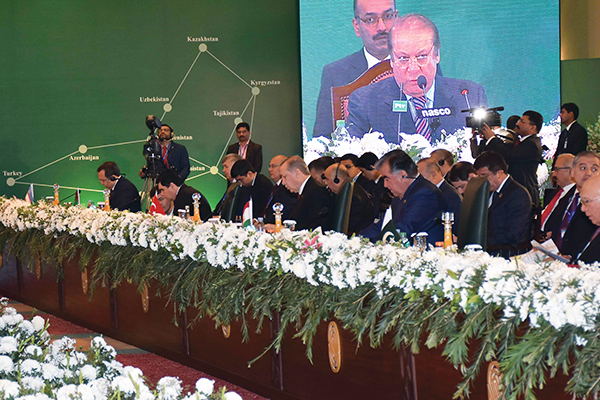 With seven foreign heads of state attending, the 13th summit of the 10-member Economic Cooperation Organization was a diplomatic coup for Prime Minister Nawaz Sharif. The summit was a show of regional solidarity with Pakistan, bloodied by nationwide terror attacks in February.

Iran, Pakistan, and Turkey established the ECO in 1985—from what was left of the RCD—to promote economic, technical, and cultural ties. But the 32-year-old ECO has yet to take off because many member states are internally troubled or dysfunctional. For example, Turkmenistan is supposed to pipe its gas to India through Afghanistan and Pakistan, but knows that won’t happen; Uzbekistan’s Mirziyoyev didn’t turn up because Afghanistan and Pakistan are seen as providing havens to its savage terrorists; and the covert war between Afghanistan and Pakistan via border-crossing terrorists is on the upswing.

Nothing works better than trade to avoid war. But nothing destroys borders more effectively than free trade and the free movement of people, which is what regional connectivity means. This runs contrary to the insecure nationalism, rampant across ECO states, that demands iron fences.

The summit’s theme, regional connectivity, appears most likely through China—a nonmember state officially made an observer at the summit—because it has the economic might to impose some peace among squabbling regional players thanks to its trade ties with virtually all of them.

The ECO will disappear post-summit from the public’s radar. But hosting it clearly signaled to the world that Pakistan is not “isolated” diplomatically, and involving China can only help ensure that it becomes more than just a photo op.