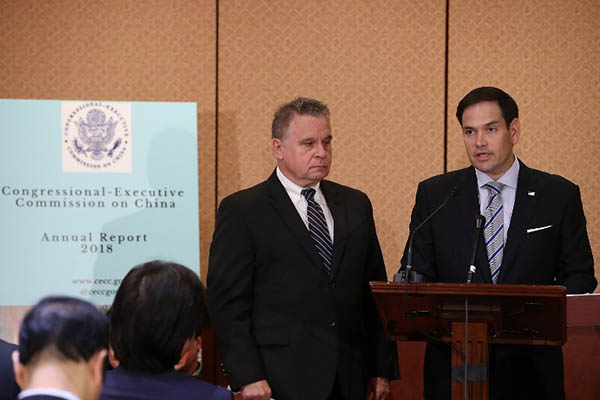 The bipartisan Congressional-Executive Commission on China said in its annual report that repression has worsened in recent years despite Beijing’s dramatic economic growth and broader global engagement. It highlights “the dire human rights situation inside China and the continued downward trajectory, by virtually every measure,” since Xi Jinping became the Communist Party’s general secretary in 2012 and president the following year. “Of particular concern is the mass, arbitrary internment of as many as one million or more Uighurs and other Muslim ethnic minorities in ‘political reeducation’ camps in western China,” committee chairman Senator Marco Rubio and co-chairman congressman Chris Smith said in the report’s summary. Such abuses “may constitute crimes against humanity,” they warned.

The crackdown on religious groups and the Uighurs in particular “has not been this severe since the Cultural Revolution” of the 1960s, Smith, who has long pressed Beijing to undertake greater reforms, told a news conference. He said the report contains a prisoner list of over 1,300 people who are incarcerated because of their faith or ethnicity.

“Human rights conditions have deteriorated again this year, and that has adversely affected both U.S.-China relations and the people of China’s ability to exercise their fundamental human freedoms,” Rubio added.

The report stressed that the Communist Party unflinchingly continues to preserve its monopoly on domestic political power “through state-sponsored repression, surveillance and indoctrination.” Washington, and in particular Congress, has been a consistent critic of Beijing’s treatment of human rights.

But the government of the world’s most populous nation has come in for criticism on multiple fronts, including the United Nations, which in August decried as “deeply disturbing” recent allegations of large-scale arbitrary detentions of Uighurs and other Muslim minorities.

Beijing has disputed the U.N. findings, saying the actions were necessary to combat extremism and terrorism on the country’s western frontier, on the border with Pakistan.

Authorities in China have long denied the existence of internment camps despite mounting evidence from both official documents and testimonies from those who have been held in them.

The United States this year took in the widow of Nobel Prize-winning dissident Liu Xiaobo, a veteran of the 1989 Tiananmen Square protests who died last year of liver cancer while serving an 11-year sentence for “subversion.”

Rubio said the commission plans to nominate Uighur scholar Ilham Tohti, detained in 2014 and currently serving a life sentence on charges of separatism, for the 2019 Nobel Peace Prize for promoting dialogue and peace between majority Han Chinese and Uighurs.

Rubio noted the report’s recommendations include embedding the issue of human rights in all aspects of bilateral relations and holding Chinese officials accountable for abuses, through sanctions, visa restrictions and other methods. “I believe the Trump administration will be receptive to these recommendations,” he said.

In its 324-page report, the commission assailed Beijing for its heavy-handed dealings with Hong Kong, citing the “continued erosion” of the city’s autonomy as it faces an unprecedented challenge from Beijing. It said the party implements repressive policies in Tibet, including “extensive and intrusive surveillance, strict regulations and rules to restrict Tibetans’ religious and cultural rights.” And they pointed to a continuing crackdown on the country’s Christian community, including the burning of Bibles and shuttering of churches, as “further evidence that whatever space previously existed for Chinese citizens to worship and live out their faith peacefully has all but disappeared.”