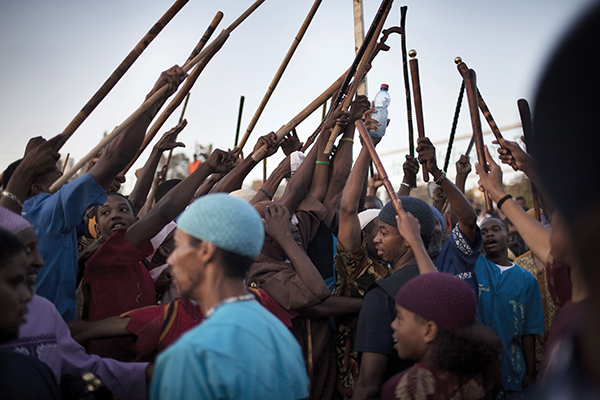 The move to disarm the Middle East gathers pace.

As Iranian diplomacy is renewed in earnest, and as Syria promises to surrender its poison weapons, a perennial clarion call is revived across the Middle East. Want an end to Syria’s chemical weapons or Iran’s nukes? Want to end all Middle East arms proliferation? Dismantle Dimona.

For now, Israelis are not concerned the United States will alter its policy of allowing the Jewish state to keep its nuclear arms under wraps at the secret plant near the Negev town of Dimona. But as talks between Iran and America intensify, and as Tehran is likely to demand concessions, some diplomats are demanding Israel be included in a wider deal, and even some Israelis advocate emerging from the nuclear shadows.

At the United Nations last month, Iran’s President Hassan Rouhani’s called for a “nuclear-free zone” in the Middle East. “I wouldn’t be surprised” if the Iranians made the same demand in negotiations just started in Geneva between diplomats of six leading countries and Iran, said Gary Samore, the White House point man on disarmament during President Barack Obama’s first term.

Israeli officials, of course, dismiss Iran’s demand for a nuclear quid pro quo as false symmetry, which equates their law-abiding democracy, threatened with annihilation by dictatorial neighbors, with countries that have a long track record of cheating on international treaty obligations.

Israel’s “don’t ask, don’t tell” nuclear policy began as soon as it acquired nuclear weapons, which coincided with the start of the security alliance between Israel and the U.S. To allay John F. Kennedy’s concerns about the newly-built Dimona nuclear facility, Israel’s current president, Shimon Peres, who met JFK in Washington in 1963 shortly before his assassination, introduced an ingenious formula that has guided relations ever since.

On March 10, 1965, Israel’s then-prime minister, Levi Eshkol, put that formula in writing, signing a memorandum of understanding with a member of President Lyndon Johnson’s national-security team, Robert Comer. According to what became known as the Eshkol-Comer MOU, Israel would not be the first country to “introduce” nukes to the Middle East.

Since then, Israel has refrained from declaring itself a nuclear state and never openly tested nuclear arms, as both India and Pakistan did in 1998. “We have a very clear policy of ambiguity,” explained Yuval Steinitz, Israel’s minister for strategic affairs and a close ally of Prime Minister Benjamin Netanyahu.

Although Israel’s arsenal is estimated to contain between 75 and 200 nuclear warheads, America is satisfied that by not testing or declaring them the country isn’t “introducing” nuclear weapons to the region. Accordingly, Washington has consistently deflected persistent international demands for Israel to join the Nuclear Non-Proliferation Treaty.

Steinitz sidesteps any direct reference to Israel’s nuclear arsenal. But, he told Newsweek, Israel is prepared to consider signing arms-limitation treaties as soon as “there is unambiguous peace in the region and when all calls for our destruction end.” “To put it bluntly,” he added, “if the Arabs and the Iranians disarm, there will be peace in the Middle East. If Israel disarms there will be a holocaust in the Middle East.”

But diplomats at the U.N., and even some in Washington, suggest that everything may be on the table, including pressure on the Jewish state to change its nuclear status, now that negotiated agreements are becoming the only game in town.

Syria, which managed to avoid an American military strike by hastily joining the Chemical Weapons Convention, says the only reason it built a chemical arsenal was to defend itself from Israel’s nuclear weapons. Now President Bashar al-Assad is demanding that Israel sign the NPT. Coming at the same time that Iran is proposing to curb some of its nuclear activity in exchange for lifting international sanctions, demands that Israel also abandon its nuclear arms program are also set to increase.

Samore, the former Obama official who is now president of the advocacy group United against Nuclear Iran, acknowledged he has no firsthand information on the current Geneva talks. But, he said, in past diplomatic sessions with Iran “we often heard of a nuclear-free zone,” especially from the former top negotiator, Saeed Jalili.

Jalili is deemed a hardliner, especially when compared to the affable current foreign minister, Javad Zarif, who led the Iranian team at Geneva this month. Samore says that as far as he knows Iran has put no new ideas on the table at Geneva beyond some “warmed-over soup” from the days of former hardline president Mahmoud Ahmadinejad.

But, whatever Iran proposes, “I doubt the United States will be diverted to a regional approach that would involve Israel,” Samore said. Indeed, American officials last month forged a coalition that blocked an Arab-led resolution at a meeting of the Vienna-based International Atomic Energy Agency’s board of directors, which called on Israel to join the NPT and open its facilities for international inspections.

In 2010, though, American diplomats failed to stop a resolution at a U.N. gathering of NPT signatories that called to convene within two years an international conference for creating a nuclear-free zone in the Middle East. Since then, the U.S. has been obliged to spend considerable political capital to prevent that conference from convening.

Achieving a nuclear-free zone in the region “is a long-term undertaking,” said a U.S. State Department official, adding that American conditions for convening the conference include “a comprehensive and durable peace in the region, and full compliance by all regional states with their arms control and nonproliferation obligations.”

Recently, in an Egyptian-led gathering at the U.N., high-level officials from Iran, the Arab states and several leading Muslim and non-Muslim developing countries also called on Israel to join the NPT and help convene the international conference. Israel “must be cooperative,” said Mikhail Ulyanov, director of the Russian foreign ministry’s disarmament department. Ulyanov said Israel better recognize that cooperation would be in its own interest.

Avner Cohen, the Israeli-born author and professor at the Monterey Institute of International Studies, who has written extensively on Israel’s nuclear history, says Israel’s policy of ambiguity is “politically anachronistic, normatively flawed, and democratically and morally wrong.” It is time for Israel to be more honest and transparent about its nuclear arms. “Ambiguity, evasion and nonacknowledgement are not the right policies for the 21st century,” he says.

But most Israelis would rather stick with the old formula. As former deputy minister of defense, Ephraim Sneh, told Newsweek, “If they want to guess what we have, let them guess, and get scared.” For the time being, America agrees.