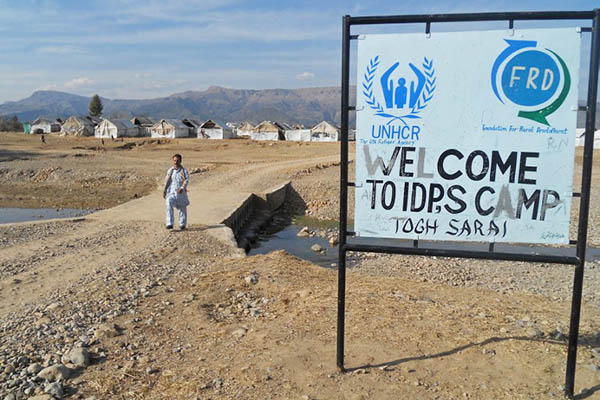 Internally displaced people from Pakistan’s tribal areas look forward to the day their lives can return to normal.

For Zarmata Bibi, a grandmother from the tribal areas, landmark peace talks between the government and the Taliban aimed at ending a seven-year insurgency couldn’t come soon enough.

The 60-year-old has lost both a son and a granddaughter to the conflict, seen her home turned to rubble and was forced to flee in 2012, uncertain if she and her remaining family members would ever return. “I miss my home, I miss my relatives, I miss everything. Any move for peace means returning to normal life,” she said from her temporary home in Hangu.

Bibi is one of Pakistan’s nearly 750,000 “internally displaced people” (IDPs). They are domestic refugees whose stories rarely figure in the daily coverage of military operations and suicide bombings that have blighted the country ever since Islamists in the border areas rose up against the Islamabad government for siding with Washington in its “war on terror.”

While analysts are skeptical over the outcome of talks announced by Prime Minister Nawaz Sharif that began last week, the dialogue has ignited hopes for some refugees desperate for good news after years of hardship. Caught between the Taliban on the one side and military shelling on the other, many say peace talks are their best chance for some sort of lasting solution.

“Hopelessness is a sin in Islam,” said Haji Namadar Khan, a 57-year-old from Khyber district who has been living in the Jalozai Camp for refugees on the outskirts of Peshawar since 2009. “In the end, dialogue will be the only solution. I am hopeful the current peace process will lead to a solution.”

The plight of Pakistan’s internal refugees came to national prominence when many were forced to flee Swat Valley in 2009 following an Army operation against the Taliban. Fundraising drives at home and abroad provided them with food, shelter and provisions, and after the conflict many displaced returned home.

Though that battle is over in Swat, Pakistani troops are still fighting a homegrown insurgency that has raged since 2007 in the country’s semi-autonomous tribal belt that the United States sees as the global headquarters of Al Qaeda. The worst hit area is the Khyber district, where the Taliban and pro-government militias have clashed over the past year.

According to an official report some 750,000 displaced people are living outside the refugee camps, often in rented houses or with friends and relatives in settled areas. An estimated 40,000 who are even less fortunate are forced to live in camps in Peshawar, Kurram tribal district and Hangu.

In the camps, tents stretch for as far as the eye can see. There is no running electricity and limited water, and residents are exposed to the searing heat of summer, when temperatures can reach 50C before plunging below zero during the frigid winter.

The latest displacement started late last month when some 1,500 families—about 13,000 people—left their villages in North Waziristan fearing an impending military offensive against Taliban insurgents. That threat failed to materialize. Arshad Khan, a senior official from the FATA disaster management authority, said the government is working on repatriating most families in March, with compensation payments of Rs. 25,000 for the displaced.

For some, the move to hold talks with the Taliban has fuelled a deep longing to return. “I want to go back, I want to see my school and school fellows, I miss my cricket, I miss my friends,” said Tahir Khan, a 15-year-old from Khyber Agency currently living in Peshawar.

But others remain skeptical of peace efforts, citing the wide gulf between the two sides and past failures. The Taliban’s demands include the nationwide imposition of shariah law and an end to U.S. drone strikes, conditions the government and Army are unlikely to be able to meet.

Regional deals in the past have also failed, most notably in 2009 when a ceasefire between the two sides in the Swat Valley broke out after the Taliban carried out public beheadings and flogged women. “I am not hopeful of these peace talks,” said Sakhi Ullah, a 47-year-old refugee who lost his sister during the conflict and is now living in a rented house in Jarma village of Kohat. “All such efforts in the past have failed. If I go back I will be killed either by the Taliban or a stray shell from the security forces,” he continued. “I fear, I will never return and will never see my village again. I have no hope of peace in the next few years.”