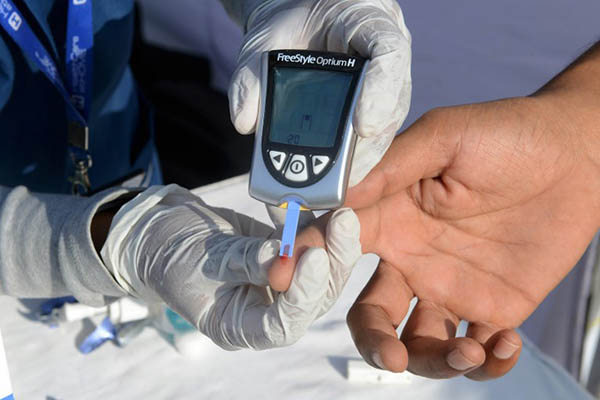 India is facing an epidemic of diabetes and high blood pressure, often called “silent killers” because they lead to heart disease, said a report on Monday involving more than 1.3 million people.

The rate of diabetes in India is over six percent, while around one quarter of people have high blood pressure, said the first nationally representative figures on the topic, published in the Journal of the American Medical Association (JAMA) Internal Medicine.

The rates of diabetes and hypertension were particularly high among middle-aged and elderly people. While these rates are lower than the United States and China, experts say a combination of widespread tobacco use, genetic susceptibility to diabetes and a lack of access to quality medical care are to blame.

“In middle-age to older adults across all geographic settings and socioeconomic groups in the country, the prevalence of both diabetes and hypertension were disturbingly high,” said an accompanying editorial by Alka Kanaya of the University of California, San Francisco. Overall, prevalence of diabetes was 6.1 percent among women and 6.5 percent among men.

Young adults also had unexpectedly high rates of hypertension—the rate was 12 percent among those aged 18-25.

Whether rich or poor, all groups were similarly affected by diabetes and high blood pressure. Being wealthy was associated with only a modestly higher risk of diabetes, on the order of about three percent. Among the poorest households in rural areas, the rate was also high—5.9 percent had diabetes and 30 percent had hypertension.

“Understanding how diabetes and hypertension prevalence varies within a country as large as India is essential for targeting of prevention, screening, and treatment services,” said lead author Pascal Geldsetzer, a doctoral student in the Department of Global Health and Population.

The study was based on health data collected from 1,320,555 adults across India between 2012 and 2014, including plasma glucose and blood pressure measurements. “India has a window of opportunity to invest in its health system to effectively tackle hypertension and diabetes—both major killers,” said Rifat Atun, co-senior author and professor of global health systems in the Department of Global Health and Population. “However, because the epidemics are worsening rapidly, now is the time for urgent action.”