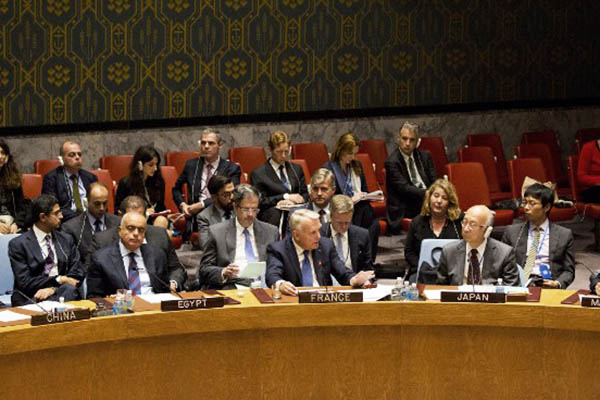 Russia on Saturday vetoed a U.N. draft resolution demanding an end to the bombing of Aleppo, but its own rival measure on a truce in Syria’s war-battered city was also rejected.

The failure of the two resolutions deepened divisions at the Security Council between Damascus ally Moscow and the Western powers backing opposition rebels in the war. It was the fifth time that Russia used its veto to block U.N. action to end the five-year war in Syria, which has claimed 300,000 lives.

As the council meeting got underway, the Syrian regime pressed its assault on rebel-held areas of Aleppo, where 125,000 people are living under siege and facing almost-daily heavy bombing.

French Foreign Minister Jean-Marc Ayrault urged the council to take immediate action to save Aleppo from being destroyed by the Russia-backed Syrian bombing campaign.

“What is at stake today is first and foremost the fate of Aleppo and its people,” Ayrault told the council. “But it’s more than that—it’s the hope of establishing at last an end to a conflict for which we are all, all of us, paying the catastrophic consequences.”

Ayrault said the council “must demand immediate action in order to save Aleppo.” In a message directed at Russia, Ayrault said any country that opposes the French measure will “give Bashar al-Assad the possibility of killing even more.”

The draft resolution presented by France called for an end to all military flights over Aleppo and to the aerial bombardments that have escalated since the Syrian army launched an offensive last month. It won 11 votes in favor in the 15-member Security Council, but Russia and Venezuela voted against. China, which had in the past backed Russia to block resolutions on Syria, abstained, as did Angola.

Shortly after the Russian veto, the Security Council rejected the rival draft presented by Moscow by a vote of nine against, four in favor and two abstentions.

Britain, France and the United States voted against the Russian measure that called for a ceasefire but did not mention a halt in the air strikes.

Russian Ambassador Vitaly Churkin, who holds the council presidency, said the two votes represented “one of the strangest spectacles” at the Security Council because all 15 members knew from the outset that they would fail. “This waste of time is inadmissible,” said Churkin.

British Ambassador Matthew Rycroft described it as “a bad day for Russia, but an even worse day for the people of Aleppo.”

China, Egypt, Russia and Venezuela voted in favor of the Russian measure, while Angola and Uruguay abstained. Following the meeting, Churkin insisted that diplomatic efforts on Syria were not dead.

“No, no, no,” he said when asked if this was the end of diplomacy on Syria. “It’s just the end of one very weird meeting of the Security Council.”

The Syrian and Russian bombing campaign has escalated since the Russian-backed Syrian army launched an offensive to retake the city on Sept. 22. Since the regime offensive began a few days after a U.S.- and Russian-brokered ceasefire collapsed, at least 290 people—mostly civilians—have been killed in rebel-held areas, 57 them children, the Syrian Observatory for Human Rights reported. And 50 civilians including nine children have been killed in rebel shelling on regime-held areas of the city, according to the Britain-based monitoring group, which relies on a network of sources on the ground.

It said government forces were making further advances on Saturday ahead of the Security Council session. “The battle is unfolding in the center, particularly in the Bustan al-Basha district where the army is advancing, in Sheikh Said in the south, and on the northern outskirts where the regime has taken the Uwaija neighborhood,” Observatory chief Rami Abdel Rahman told AFP.

The monitor reported heavy air strikes on the rebel-held Fardos and Sukari neighborhoods. An AFP correspondent said the raids mostly hit combat zones in the city.

German Foreign Minister Frank-Walter Steinmeier warned that the mounting tensions between Washington and Moscow over the conflict had created a situation “more dangerous” than the Cold War. “It’s a fallacy to think that this is like the Cold War,” Steinmeier said in an interview published by Bild newspaper. “The current times are different and more dangerous.”