[dropcap]H[/dropcap]is fall shook not only his supporters but also his opponents. Imran Khan’s accident on Tuesday, caused by a spill from a forklift hoisting him to a high stage in Lahore, caused archrival Nawaz Sharif to set aside his intended ripostes to Khan’s verbal assaults and pray for his health. And his younger brother, more vociferous in his duel of abuse with the Pakistan Tehreek-e-Insaf chief, went to Khan’s hospital to ask after him.

The Sharif brothers were driven by the fear of losing out to a sympathy wave for Khan on Election Day, May 11. A sympathy vote for the Pakistan Peoples Party in 2008, after Benazir Bhutto’s assassination, had kept their Pakistan Muslim League (Nawaz) out of power at the center. PMLN is already set to lose in Khyber-Pakhtunkhwa province to Khan’s Pakhtun-Punjabi appeal; an outpouring of voter sympathy for Khan can cause the PMLN’s whisker of a lead over the PTI in vote-rich Punjab province to vanish.

In addition to the sympathy factor, religion will also weigh in. As a born-again Muslim, Khan believes in predestiny. He has often said—even when his public rallies were not as big as they later grew to be—that he knows in his bones he will sweep the 2013 elections. This firmness of faith and self-belief strengthen him in the eyes of voters.

In Pakistan: a Personal History, Khan’s account of his life published in 2011, he described his born-again transformation, strongly tinted by a sense of personal destiny. The book repeatedly points to a divinely-programmed life based on achievements that apparently looked incongruous with his personal endowments.

The clairvoyant predictions about his greatness started early. He recalls: “Pir Gi from Sahiwal said I would be very famous and make my mother a household name.” After a not-so-fruitful season on the field, Khan had announced his first retirement from cricket when he met another clairvoyant. “Baba Chala lived in a little village just a few miles from the Indian border. He certainly had not heard about my retirement … the man looked at me and said I had not left my profession … It is the will of Allah; you are still in the game.” Khan recalled his retirement and went back to the game. 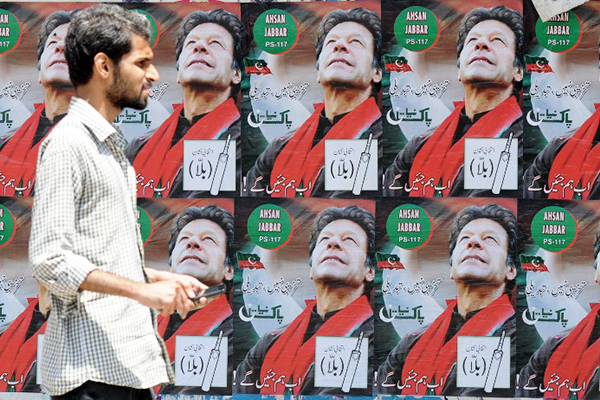 Then came Khan’s real guru, whose predictions affected him most and emboldened him into undertakings clearly beyond his mettle. That man was his spiritual mentor, the late Mian Bashir, whose forecasts about him repeatedly tested true until Khan finally accepted him. Bashir first shocked him by naming the Quranic verse his mother used to read to Khan as a baby. After that he predicted that Allah had turned the tables in his favor in the Lamb-Botham libel suit, whose reparations would have pauperized Khan. Bashir also disarmed a skeptical Jemima, Khan’s ex-wife, by accurately guessing her three secret wishes. Khan still has his spiritual mentor in Prof. Rafiq Akhtar of Gujjar Khan, but now his preordained charisma has eclipsed the clairvoyants he used to pay heed to. His electoral forecasts hold sway with the “electables”—the fair-weather politicians he accommodated in his party—who surround him.

From his sense of predestination comes his risk-taking character. But, he says: “The difference between a good leader and a bad one is that the former takes huge risks while fully grasping the consequences of failure. Leaders of a country shaping policies out of fear of losing power have always proved to be disastrous. Great leaders always have the ability to resist pressure and make policies according to their vision rather than fear.”

Khan often refers to the cricket World Cup that his not-so-highly-rated team won in 1992. While receiving the trophy, Khan made a gaffe that is not often connected to his sense of divine predestination: instead of praising his team, he started talking of the cancer hospital whose completion would now be certain. He could have been reflecting on divine intervention rather than the win’s human dimensions. He writes in his book about the handicap with which he went to the World Cup: “My not being able to play [due to a ruptured cartilage] would have a devastating impact on the morale of my young team. What’s more, I had staked the hospital on winning.” The injury was kept secret. Who was goading him on?

On Thursday, several newspapers ran his article “New Pakistan: Building a Pakistani Nation,” which refers to the Charter of Medina, or the first Constitution of Islam. “The Charter introduced the rule of law, devolution of powers, and the principle of respecting local customary laws of all tribes and religions living in the society,” wrote Khan. “It guaranteed human rights, social rights, rights of women and minorities, and religious freedom.” The Taliban and the orthodox clergy, alas, will not agree with this pluralistic interpretation.

“Allah has saved his life and unleashed a wave of public sympathy in his favor,” wrote popular Urdu-language columnist Mujeeb-ur-Rehman Shami, also on Thursday. “His address to the nation from his bed in the hospital was extremely persuasive. The accident seems to be recompense from Heaven. Surely, Allah is about to make His next move, which will be the best.”

What can I say about Khaled Sahab’s analysis. You rock as always. Tusi great ho sir.