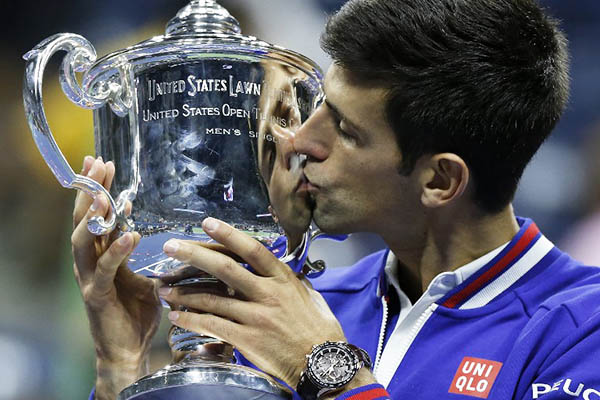 World number one Djokovic downed the Swiss world number two 6-4, 5-7, 6-4, 6-4 to win his third Grand Slam title of the year and put himself among the sport’s elite, with a chance to take aim at the record 17 Grand slam singles crowns Federer has won.

“We got to double digits now, and I’m flattered and honored to be a part of elite group of players, legends of our sports to manage to win this many Grand Slam trophies in their lives and careers,” Djokovic said. “To be just mentioned alongside them is truly something special.”

Rafael Nadal and Pete Sampras share second on 14 with Roy Emerson having taken 12 and Rod Laver and Bjorn Borg the next within reach of Djokovic on 11.

“I’m 28. I have always valued the care for my body, and my mind,” Djokovic said. “I will continue on with the same kind of lifestyle. Hopefully this same kind of approach will give me longevity and I can have many more years to come and many more opportunities to fight for these trophies.”

Winning three Grand Slams in the same year was harder for Djokovic the second time around, but the Serbian star finds his success more fulfilling as well. Together with his Australian Open and Wimbledon crowns, Djokovic matched his 2011 season by winning the same three Slams.

“It’s definitely more difficult to repeat something like that than actually doing it for the first time,” Djokovic said. “I’m a different player, a different person today than I was 2011. As a father and a husband, experiencing different variety of things in my life, it’s completely different approach to tennis. I feel more fulfilled. I feel more complete as a player than I was in 2011. Physically stronger, mentally more experienced and tougher, as well.”

Djokovic won his second U.S. Open title after 2011, but he has lost four other times in the championship match at Arthur Ashe Stadium—in 2007 to Federer, 2010 and 2013 to Nadal and 2012 to Britain’s Andy Murray. But it was lessons learned in those defeats that taught him things vital to outlasting Federer on Sunday in a match delayed three hours by rain.

“I think being in the situation before helped me to understand particular obstacles that are on the way and how I need to overcome them,” Djokovic said. “I can’t really find a particular reason why I have not been so successful in the finals here as I am maybe in Melbourne, for example, or Wimbledon. But I’m glad that this tradition of losing in finals is broke now. Hopefully I can have more chances to fight for a trophy.”

Djokovic did himself no favors with a slip and fall early in the match on a slick spot but escaped with only scrapes, bloodied but unbowed. “I slipped and hurt myself, but it was luckily nothing that was major,” he said. “The scratches I have all over the body, it’s just they are wounds basically. I didn’t twist anything. I didn’t hurt anything.”

Djokovic would have had a calendar Grand Slam had he not lost to Stan Wawrinka in June’s French Open final, but he refuses to look at his glass as empty in any way. “It has been an incredible season. I’m very fortunate to experience a great success this year,” he said. “I won three out of four. It’s more than I could ask for. Of course I do have lots of expectations and high ambitions… but sitting down here with this trophy and reflecting on what I have achieved, it’s quite incredible. So I’m definitely very satisfied and proud of that. Tonight is a night that I’ll definitely remember for a long time.”